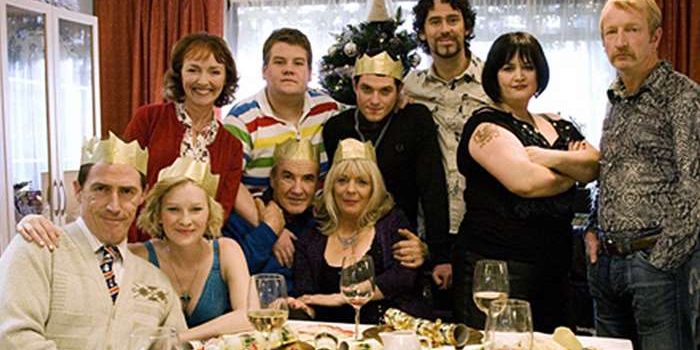 10 Of The Best TV Christmas Specials

Christmas is a time to huddle around the TV. When it’s cold outside, the Christmas Special brings so much warmth and satisfying resolution that...

Christmas is a time to huddle around the TV. When it’s cold outside, the Christmas Special brings so much warmth and satisfying resolution that you could probably turn the heating off.

Irish Cream liquor in hand, grazing on a selection box – there’s nothing better than closing the curtains, switching on the Christmas tree lights, and indulging in what makes Christmas special.

Here are ten of my favourite Christmas Specials – available to stream, and enjoy time and time again.

1. The Office Christmas Special Pts 1 and 2

If there’s ever been a better opening for a return to a beloved series, the David Brent monologue about accidentally head-butting a female interviewee is hard to beat. It was the perfect resolution to a brilliant series that had left a rather large handful of loose ends.

David Brent finally finds a mate, and the Tim and Dawn subplot is so perfectly drawn out that you literally pump the air when their lips finally meet. If you’re looking for an ending to rival Love Actually, then take a trip out to the Wernham-Hogg office-block for this particularly special conclusion to a fabulous series.

Series 1, episode 3 of Nigella’s Christmas Kitchen, was where we were treated to her now infamous Turkey in a bucket recipe. It got the whole country rushing out into the garage, chipping the caked-on plaster off the sides of the plastic bucket, and plunging their birds in; for a Christmas dinner so moist that you barely needed the sherry.

Nigella’s Christmas specials have not only had a significant impact on our Christmas menus, but on to two of our most beloved Brit-coms – Gavin and Stacey, and The Royle Family.

3. The Royle Family – The New Sofa

There are no less than 6 Christmas Specials to choose from, but The New Sofa is definitely one of the best.

Dave and Denice invite their respective parents around for a Christmas dinner inspired by Nigella, opening with Cup-a-Soup in a bowl, and followed by carrots from Dave’s dad’s allotment – boiled, crushed, and garnished with a nob of Stork.

This episode is crammed with disasters and performed by such pitch-perfect performances from the stellar cast, that it bears watching time and time again. If you’re failing to muster up your Christmas mojo, then have a Christmas like Nigella, with everyone’s favourite council estate family.

Gavin and Stacey is the story of two working-class twenty-somethings who fall in love, battling through the tribulations of a long-distance relationship, partnering Billericay and Barry Island in a clash of cultures.

The 2008 Christmas Special takes place on Christmas day with the whole clan crammed into Gavin’s family home. Michael Shipman (Gavin’s dad) has grave concerns about Nigella’s turkey bucket, while Gavin and Stacey prepare for an announcement that upsets the applecart, causing huge ructions that result in a hilarious bout of playground name calling.

A classic Special that anyone who’s experienced a family Christmas will relate to.

5. The League of Gentlemen – Christmas Special 2000

Rev. Bernice Woodall, a vicar who no longer believes in God, is visited by four characters who help her find her Christmas spirit – only for history to rear its ugly head.

Classic un-Christmassy fair from the minds of some of the darkest comics the UK has ever seen.

Knowing Me, Knowing Yule was first broadcast in 1995, and perfectly demonstrated why Alan Partridge was the King of Cringe.

The chat-show, hosted from a mock-up of his own home, incorporates some marvellous performances from some of the biggest names in British comedy, including Rebecca Front, playing a Christian who wants sex taken off the agenda.

Of course, everything goes hilariously wrong, culminating in Alan punching a wheel-chair user and the commissioner of the BBC, with a turkey that is stuck to the end of his arm.

Source: This Was Television

Parodies of Dicken’s classic Christmas tale are nothing particularly unusual, but this 1988 classic is one of the best.

In a break from the usual format, the egotistical, long-suffering Edmund Blackadder is transformed into the generous, jovial and all-round good egg: Ebenezer Blackadder. The ghostly visitations, played by incarnations of the series’ regular characters, help to change jovial Ebeneezer into a proper miserable old git.

8. Only Fools and Horses – Christmas Crackers

Only Fools and Horses will forever be part of the British comedy hall of fame, and Christmas Crackers, first aired in 1981, is a perfect example of what made this heart-warming comedy the enduring success that continues to warm the Christmas cockles even today.

Revolving around Grandad who ruins the Christmas turkey, and Del and Rodney’s attempts to cheer themselves up at the Monte Carlo Club, this is one Christmas Special that is as funny today as it was back then.

This isn’t specifically a Christmas Special, but this Series 7 episode revolves around a disastrous Christmas Day.

Mark (David Mitchell) has his mother and uber-bitter father over to the flat for Christmas dinner, where he introduces them to his new girlfriend, Dobby.

Mark’s dad, Dan (played by a wonderfully tight-lipped Clive Merrison) clash over the dinner table, with a climax resulting in ham pushed through a letter shredder.

Classic comedy from the masters of cringe.

House of Fools is a very particular type of comedy – one that explores the surreal, the ridiculous and the mock-heroic with gusto, grace, and rather questionable sanity.

Vic and Bob’s Christmas Special finds the gang of lunatics making a journey underground to Phil Collins’s house in an attempt to save Christmas. Of course, it’s utterly ridiculous, but there’s nothing like a bit of Vic and Bob, partnered with a wonderful cast of loons, to get you into the Christmassy spirit.

So, there you go. 10 of the Best Christmas Specials that will get you rushing for the mince pies in absolutely no time.