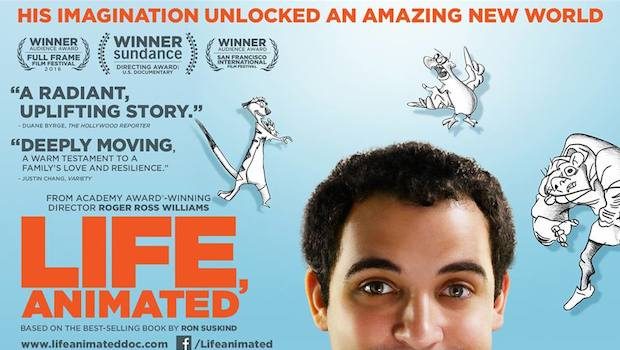 This year’s Oscar nominees in the category for Documentary (Feature) include a made-for-television recollection of the trial of OJ Simpson, a powerful story about...

This year’s Oscar nominees in the category for Documentary (Feature) include a made-for-television recollection of the trial of OJ Simpson, a powerful story about refugees, and two very important films focusing on politics and race, but one that instantly stands out from this admittedly strong crowd is Roger Ross Williams’ Life, Animated. You may ask why that is, taking into consideration the extreme relevance of some of the other films touted for glory and the answer is quite simple: pure inspiration.

Life, Animated tells the heartfelt story of Owen Suskind, a young boy who sadly finds his life turned upside down at the tender of age of 3 when he develops autism. With it taking hold of him and rendering him without communication abilities and unable to interact with the people around him, it would take a miracle for Owen to find his way in the world. Thankfully, that’s where Disney plays its part and more specifically their movies.

As an avid watcher of all of the Disney animated feature movies from a young age, Owen begins to use them as a means to communicate and as a way to understand the world he lives in. Whether quoting dialogue from said films or simply investing in specific characters and their actions, the young boy blossoms into a young man whose confidence knows no limits. Life, Animated takes us on a journey like no other where a love for the art of film is immeasurable and proves that it is a medium that can inspire true life tales of magic.

The power of a documentary comes in its connectivity with the audience and in the case of Life, Animated we have a film that instantly strikes a chord and proves to be somewhat of a heartfelt journey into the life of a truly remarkable individual. In presenting Owen Suskind’s story, director Roger Ross Williams has created a film that often echoes our own experiences with cinema, with the medium often providing solace, escapism and guidance within our own lives. With this connectivity, Life, Animated becomes a movie that we are drawn in by and Owen a person that we find ourselves invested in from the get-go.

As we journey through the good times and the tough times for Owen and his family, that emotional connection grows stronger, and in the times where the struggles hit, whether it be Owen’s initial inward personality or the sad moment in which we find out that his girlfriend has broken it off with him, there is an emotional impact that strikes a chord. Every time we see his parents get emotional it reverberates to our very selves and when you witness Owen smiling and enjoying a moment with some of his favourite Disney personalities it really is heartwarming.

All great real-life stories deserve to be told and thankfully we get to learn of the brave and inspiring Owen Suskind through the brilliant Life, Animated. Important, relevant and wholly heartfelt, this is a top contender to take Best Documentary at the Oscars and rightly so.