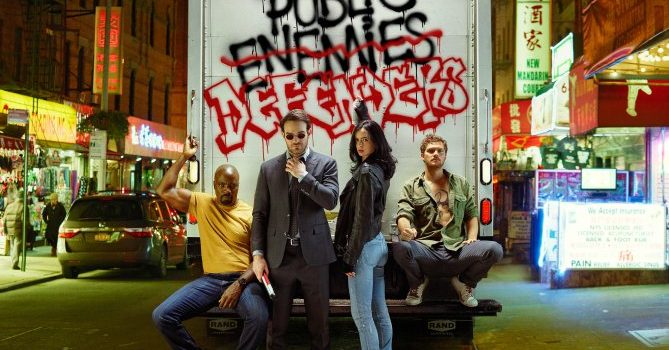 Marvel’s The Defenders Band Together For Awesome First Teaser

Daredevil, Jessica Jones, Luke Cage, and Iron Fist all feature in this killer new viral video for Marvel's The Defenders!

Whilst the world still anxiously awaits the first trailer for Netflix superhero team-up Marvel’s The Defenders, the streaming service has just dropped this sweet first-look teaser, which sees the heroes all together for the first time on screen.

The bizarre new viral video sees Daredevil (Charlie Cox), Luke Cage (Mike Colter), Jessica Jones (Krysten Ritter), and Iron Fist (Finn Jones) riding in an elevator together at Midland Circle Financial. Previous reports have said this is from a sequence where The Defenders arrive independently and then join forces in the series ‘Hallway Fight Scene’.

The video ends with the timestamp 08.18.20.17 – or August 18th, 2017. So, we now know exactly when the eight-part series hits Netflix! And, if you type in the I.P. address, it also leads you to the New York Bulletin website. Check out the teaser below…