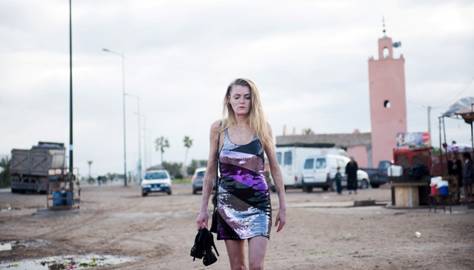 Directed and co-written by Sacha Polak

“Arresting from the outset” – Screen Daily

DIRTY GOD is a film about a young mother from London who must pick up the pieces after an acid attack leaves her with severe facial burns. Prior to the attack, with limited education and opportunities, Jade’s main currency was her looks. Her face has been reconstructed, but her beauty is gone. Jade must set about rebuilding herself – and this is a gargantuan task.

Cast adrift from her young daughter, Jade finds solace in the hidden world of online liaisons where she uncovers the passion and connection she’s craved in an often humorous and celebratory way. However, the actions of a stranger threaten to turn her life upside-down once more, and those around her are ill-equipped to halt her descent. As family life and friendships start to crumble, her lowest ebb proves the inspiration that Jade needs. Jade takes drastic action, finally finding her path back to her daughter and herself.

Modern Films will release DIRTY GOD in the UK on 7 June 2019. In addition to festivals and talent-led panels, Modern Films are planning a number of previews including a Parliamentary event at Westminster and a mayoral screening at the Greater London Assembly to shed light on the incidences of acid attacks and corresponding legislation against them.

Modern Films is a London-based, female-led film production, distribution and event cinema company. Established in 2017 with a mandate to work on content that addresses social issues head-on through film and media content, they launched with the Event Cinema release of Manifesto starring Cate Blanchett and with Executive Production on the BAFTA-winning I am Not a Witch.

Upcoming releases include the Oscar®-nominated Border (Sweden) and Never Look Away (Germany), as well as Cannes Award-winner Happy as Lazzaro directed by Alice Rohrwacher and Executive Produced by Martin Scorsese, San Sebastian Award winner Yuli – the Carlos Acosta Story directed by Icíar Bollaín and written by Paul Laverty (I, Daniel Blake) – with a Live from Royal Opera House event cinema launch,  Cannes Critics Week winner Diamantino and character portrait John McEnroe: In the Realm of Perfection to time with an upcoming charity match between McEnroe and Martina Navratilova at Wimbledon.