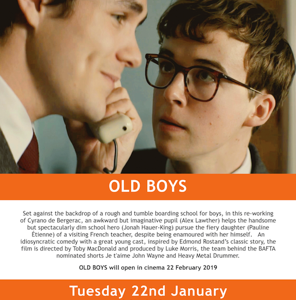 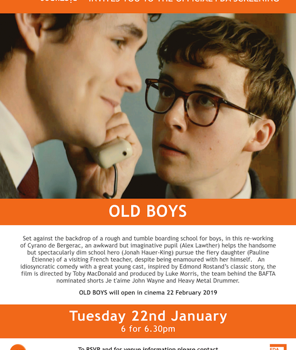 “A gently eccentric charmer of a film”SCREEN “Whether it’s prosaic or poetic, this agreeably gawky film ultimately concludes, your life is best put in...

“A gently eccentric charmer of a film”SCREEN

“Whether it’s prosaic or poetic, this agreeably gawky film ultimately concludes, your life is best put in your own words.”  VARIETY 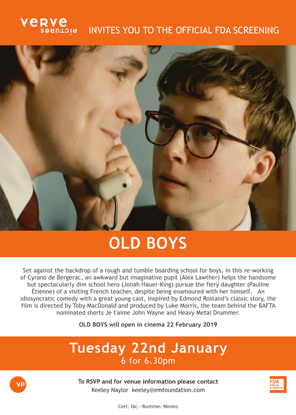 Inspired by the classic Cyrano de Bergerac story, OLD BOYS uses the backdrop of an all-boys boarding school for a quirky and heartfelt teenage take on the entertaining love triangle comedy.  Winner of the Audience Award at this year’s Dinard Film Festival, OLD BOYS will be released in cinemas on 22 February.

Alex Lawther, critically acclaimed for his role as the young Alan Turing in the muti-award winning The Imitation Game, and his recent lead role in the Netflix series ‘The End of the F***ing World’, heads up a cast of talented young actors, including César and Lumière-nominated French actress Pauline Étienne (La religieuse), rising star Jonah Hauer-King (‘Little Women’), Denis Ménochet (Assassin’s Creed) and Joshua McGuire (‘Lovesick’).

Survival of the fittest is the philosophy at all boys’ boarding school Caldermount. If you’re not a champion on the sports field, you’re a nobody.  No one knows this better than hopelessly awkward scholarship boy Amberson (Alex Lawther), who’s been at the bottom of the school’s social ladder since he can remember.

When the French teacher’s (Denis Menochet) fiery daughter Agnes (Pauline Étienne) arrives, Amberson’s life is turned upside down. He suddenly finds himself playing matchmaker for Winchester (Jonah Hauer-King), the school’s handsome but spectacularly dim school-hero.  Winchester definitely has the looks to win over Agnes but it’s Amberson who has the wits.  Will Amberson have the courage to reveal himself to her and stand up for who he really is?

Director Toby Macdonald started working on film sets as a runner at the age of 16.  His short film Je T’aime John Wayne about a young Englishman obsessed with the French New Wave was nominated for a BAFTA, selected for Directors Fortnight in Cannes, won the TCM Prize for Best Short at the London Film Festival and won the European Film Academy Award for Best Short.  His follow up, the critically acclaimed short Heavy Metal Drummer, was also nominated for a BAFTA and was selected for film festivals all over the world. Shot in Morocco in arabic, it told the story of a teenage drummer and his unrequited passion for metal. Toby has directed award winning commercials working with Partizan London and the series ‘My Life In Film’ for BBC2.

Producer Luke Morris is a twice BAFTA-nominated independent producer with a focus on new and next generation forms of production, distribution and exhibition.  He is the founder, producer and distributor of acclaimed short film label Cinema16, which released shorts from directors including Chris Nolan, Mike Leigh and George Lucas.  He’s a producer of films including music documentary All Tomorrow’s Parties and has worked as a distributor or consultant on numerous projects including films by Lynne Ramsay and Harmony Korine. He is a regular collaborator with Warp Films where he worked for seven years on production and distribution projects.  From 2011 to 2013 he collaborated with live cinema pioneers Secret Cinema, producing or executive producing their innovative immersive film events at a time when its audience network grew to over half a million people.  OLD BOYS is his first narrative feature film.

Screen International ‘Star of Tomorrow’ and BAFTA Breakthrough Brit, Alex Lawther is well known for his role as the young Alan Turing in the Oscar-winning film The Imitation Game, for which he was nominated for the ‘Best British Newcomer’ Award at The 58th BFI London Film Festival, and won the London Critics’ Circle Award for ‘Young British Performer of the Year’.  He followed with roles in films including James Graham’s A Brilliant Young Mind, Andrew Steggall’s Departure, which won him the Best Actor Award at the 2016 Dublin International Film Festival; Trudie Styler’s Freak Show, Simon Amstell’s Carnage, Jeremy Dyson and Andy Nyman’s Ghost Stories and Simon Curtis’ Goodbye Christopher Robin.  His TV work includes the Emmy Award winning series ‘Black Mirror’, in which he starred in the episode ‘Shut Up and Dance’, the BBC’s miniseries ‘Howards End’ and the BAFTA and Emmy Award nominated Netflix comedy teen drama ‘The End of the F***ing World’.

Jonah Hauer-King’s first feature was a lead role in Danny Huston’s The Last Photograph, followed by Ashes In the Snow alongside Bel Powley.  He acted in and wrote for the soundtrack for Postcards From London, and made his West End debut playing Kenneth Branagh’s son in ‘The Entertainer’.  He starred in the BBC miniseries ‘Howards End’ with Hayley Atwell and Matthew Macfadyen and ‘Little Women’ with Emily Watson, Angela Lansbury and Michael Gambon.  His upcoming films include A Dog’s way Home and Once Upon a Time in Staten Island alongside Naomi Watts.