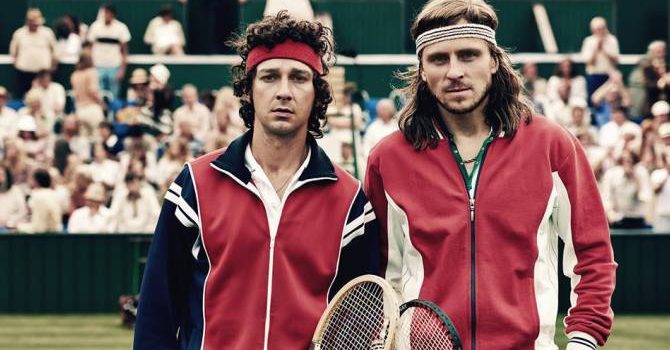 With the world in full Wimbledon fever, there’s no better time than now to check out this Red Band trailer for upcoming tennis biopic...

With the world in full Wimbledon fever, there’s no better time than now to check out this Red Band trailer for upcoming tennis biopic – Borg vs. McEnroe.

The Swedish produced film, starring Shia LaBeouf and Sverrir Gudnason as court legends John McEnroe and Björn Borg respectively, focuses on the intense rivalry between the pair during the 1980 Wimbledon tournament. Which culminated in their famed match for the Men’s Single title.

There has been much skepticism on the part of McEnroe himself – on how the actors could portray himself and Borg with authenticity in their technical ability in the sport. Though with an emphasis on the psychological aspect of their rivalry, this trailer certainly appears nothing like a standard sports drama.

Borg vs. McEnroe, directed by Janus Metz Pederson, co-stars Stellan Skarsgard, Tuva Novotny and Robert Emms. It will be distributed internationally through AB Svensk Filmindustri, and has a slated UK release date of September 22nd.

Check out the video below and stay with Filmoria for more trailers for 2017.

Borg/McEnroe is a film about one of the world’s greatest icons Björn Borg and his biggest rival, the young and talented John McEnroe and their legendary duel during the 1980’s Wimbledon tournament. It’s a story about two men who changed the face of tennis and who became legends and the price they had to pay.