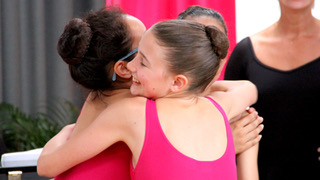 You Can Tutu Digital Release Details

Sometimes it’s hard to be yourself, but 12-year-old Tutu Marlow hasn’t ever really had that problem. That is until her first day at Best Pointe Ballet...

Sometimes it’s hard to be yourself, but 12-year-old Tutu Marlow hasn’t ever really had that problem. That is until her first day at Best Pointe Ballet School. Tutu was born to dance. Pirouetting across a stage is when she feels most at home. Her dad, Dan, has always believed in her, but it’s always been just the two of them… until now. Moving to a new neighbourhood, a new high school and a new ballet school is more than just a bit unsettling. It’s downright difficult. It’s not just the school’s uptight head dance teacher Tabitha who’s doing her best to knock Tutu’s confidence down a peg a two.

The other girls are competitive and mean, and their mothers aren’t much better. At least Tutu’s made some great new friends. Clumsy Rosily and spelling bee champion Mannie think Tutu’s unique dance talent is pretty awesome. So does the new dance teaching assistant, Kat. But if Best Pointe are going to have a chance at the National Ballet Championships, Tutu is going to have to learn to believe in herself.

You Can Tutu, is available to watch on Digital Download from 31st July.