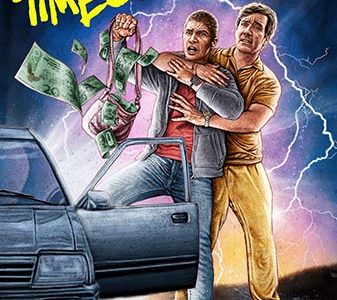 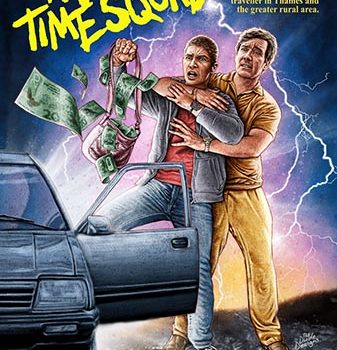 I didn’t play a street demon; I am a street demon. The film community in NZ is small enough for most active people to know most other active people – but the genre scene is small enough for us all to know each other by at least one degree of separation. Many of my friends worked on or acted in Deathgasm and they needed a night shoot of ‘street demons’ so I donned my tie-dye and offered to help out. It was a lot of fun and I think Jason and the team did an incredible job.

Have you met Peter Jackson and do you see him as the ultimate Kiwi role model?

I have met some of his major long-time collaborators like Richard Taylor (production designer) who put me in touch with Jamie Selkirk (editor/post supervisor) who mentored me through the postproduction of Romeo and Juliet, so I spent a lot of time at Park Road Post but I have never met Peter Jackson. He is certainly one of the great Kiwi legends and for filmmakers he would be the ultimate role model. His work has inspired me since I was five years old and living in a caravan when I saw a news piece about Bad Taste being selected for Cannes. I remember my dad laughing his arse off about the sheep being hit by the rocket launcher and ever since then I wanted to be a filmmaker. Then when Braindead came out I realised that filmmaking was something I might be able to do – I just needed to find a fresh approach. I still remember gagging as Tim Balme pulls the dog tail from his mother’s throat… Braindead is so good.

Not many people get to write with William Shakespeare as you did with your 2013 feature debut ROMEO AND JULIET: A LOVE SONG. That must have been a great experience?

Haha, yeah, I think that credit was a legal thing. Shakespeare really didn’t deserve it, after all he only wrote the verse. I’ll give you a moment to recover after that hilarious joke… It was fun trying to Kiwify Romeo and Juliet but the difficult part was filming it as an opera. Coming from music videos I was used to shooting to music but to shoot the full play in its entire original text, all set to a series of songs, and to try to make it emotionally moving was a major challenge. It taught me that I had a lot to learn in terms of storytelling.

You directed over 180 music video for some top Kiwi and International acts. Can you name some we would have seen?

It’s hard to tell which videos you may know because the music scene varies so vastly from country to country. My band, Collapsing Cities, was signed in the UK around 2008/9 and we toured and did the big festivals so maybe you saw something then. I used to make at least a video a week so it’s hard to remember them all. My most popular videos were ‘Just a little bit’ – Kids of 88, ‘Standing in the rain’– Sola Rosa, ‘Autumn’ – Artisan Guns, some The Naked and Famous stuff… but these were more popular in Aus, NZ, Germany and the US… the UK is pretty unique in its music scene; when my band supported the Artic Monkeys I was surprised to see that they had platinum records hanging on the wall at XFM…so antipodean.

Where did you get the idea for the MEGA TIME SQUAD script?

I wanted to do a time travel movie and I thought it would be cool if it were about a guy who went back in time to hang out with himself. But then I wondered if it would funny if he jacked himself off… Then he would feel weird about it and go back in time again to stop himself from jacking himself off and there would be this weird love triangle between a series of copies of the same guy. Then I came to my senses and realised that there was a better way to approach this idea. What if he helped himself commit a crime or escape the punishment for committing a crime? What if he time travelled to help himself steal a bunch of cash but once he got it he didn’t want to share the cash with himself? What if he time travelled so much that the various versions couldn’t remember which version was which? Then what if they started killing each other? This seemed like a better angle than a wankfest.

Time travel stories can often be so convoluted, how did you avoid that?

I drew a kind of map of the time travel and decided that the only “rule” was that when John time travels he moves in time but not in space. I was more focused on how to make time travel new again or at least address it from a less familiar perspective. I felt like we’d seen enough time travel movies where we follow the same character going back over and over again so I wanted to show the story from more of a third person point of view. We travel with John the first couple of times but after that we follow whichever version of John is driving the story. It’s not really about time travel, it’s about a lovable idiot with a time travel device who thinks time travel is cool because he gets to hang out with earlier iterations of himself.

Any favourite time travel movies you looked at for inspiration?

I watched as many as I could find and I loved most of them but the one that influenced the way this film worked was Time Crimes. Mega Time Squad is a very different film in both tone and premise but it’s similar in that there are multiples of the same guy in the same timeline and that’s what Time Crimes achieved very well. You’ll notice a dozen or so nods to various movies in the Mega Time Squad but they are not so much influences on the film; instead they are films that I imagine that John (the main character) thinks he’s in.

Did your script have to be so vulgar, or is that the NZ way?

I didn’t notice it was so vulgar until the sound designer played it to his kids. While I was writing it I was spending a lot of time with my dad and that’s how we talk. A big chunk of the dialogue is made up of direct quotes from my dad and his mates. I wouldn’t say ‘it’s the Kiwi way’ but I do think New Zealanders and Australians have a more relaxed and cheerful attitude towards vulgarity than many other parts of the world. Etymology section of answer: I was recently in Rome where I saw an original ‘vulgar’ fresco on the wall of a church from 150AD depicting the Emperor instructing slaves who were dragging St Clemente out of the ocean and the text in the fresco read “Hurry up you sons of bitches!” That’s where the term ‘vulgar’ comes from.

MEGA TIME SQUAD features some amazing special effects considering, one assumes, the low budget. How did you manage it?

I’ve been deep into VFX software since I started my career as a video artist showing in art galleries until my band was signed and I moved into making music videos and then into making films. After spending years making VFX-heavy content and then doing the VFX on Romeo and Juliet and some more on Deathgasm I have a pretty good command of the discipline. I understood that there were going to be a lot of constraints around the formal aspects of the film because, as you mention, we had no money. So I needed to work around that with regard to camera movement, for example, while still being able to pace the film and give it a cinematic feel. It was a challenge, and if my past endeavours hadn’t taught me the limits of what I could pull off competently at this budget level, I probably would’ve felt that I’d bitten off more than I could chew. As far as conceptualisation, my only rule on Mega Time Squad was that I wanted the VFX to be inherently silly while remaining cool and being something that I hadn’t seen before. Hopefully that’s what James and I achieved.

How would you best describe MEGA TIME SQUAD?

Its an absurd time travel crime comedy with a big heart about a loveable rural idiot with modest aspirations who uses a time travel bracelet to steal the money needed to fulfil his dream of moving to the neighbouring town… but he fucks up the time travelling bit.