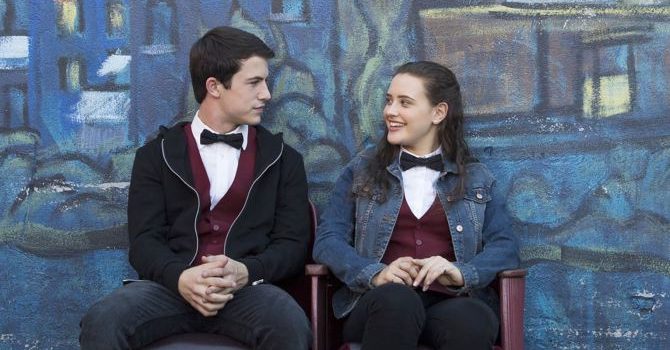 Television is fast becoming something very reminiscent of cinema, with captivating stories being brought to us on a regular basis and a real emotional...

Television is fast becoming something very reminiscent of cinema, with captivating stories being brought to us on a regular basis and a real emotional connection being created through these fascinating and engaging stories. While many will possess a somewhat blockbuster feel, it is often the quietly simplistic shows that can pack the mightiest of weight. Take for example Netflix’s latest show that is making waves, 13 Reasons Why. With a core focus on some truly alarming subjects in everyday life and society, Netflix have what can only be described as one of the boldest, bravest and unflinching shows of our generation.

Clay Jensen (Dylan Minnette) is one of the unassuming and quiet kids at school, riding his bike every day and having a handful of friends around school. A seemingly quiet and honest student, Clay’s life is somewhat turned upside down when the suicide of fellow student Hannah Baker (Katherine Langford) results in a package of cassettes being delivered to him. Each side of the tapes containing a particular reason why Hannah took her life, Clay begins to discover just who of his fellow students pushed the young woman to the post at which she felt she had no choice in life but to end it.

As the tapes highlight so much more going on within the pupils at Liberty High, Clay remembers his own moments with Hannah as his own tape lays waiting for him to find out exactly what effect he had on Hannah and her life.

The older generation often explain that they don’t just make them like they used to anymore, and in the case of 13 Reasons Why, here is a television programme that feels all the more relevant in this modern day world of endless social media and technology. Put simply, this is a show that speaks out to this generation like few others have ever been able to.

Based on the 2007 novel by Jay Asher, 13 Reasons Why can be argued to be Netflix’s most important show of all their Original properties since their huge jump in creating an ever-growing catalogue of films and TV from their own production teams. Marking the tenth anniversary of the book, the adaptation has already captivated a binge-watching public and serves as a stark reminder that such topics as suicide and rape cannot be ignored and glazed over. Often in the media we are privy to watered-down depictions of such devastating events but finally we have a show that deals with them head-on and unflinchingly.

Part of the success of 13 Reasons Why lies in its boldness, never shying away from the fact that school life can be – put simply – truly terrible and ruin lives as much as it can see heroes and role models emerge. For every successful sports star there is a quiet, clever individual being bullied and leaving so much unsaid. It has been an issue not only today but for decades and it has almost taken too long for a show to highlight this and show to the world that something must be done. This is where 13 Reasons Why can be an important first step to uncovering just how much help is required to stop such atrocities occurring all over the world.

For such a striking body of work to truly function to its full potential, it was imperative that the cast be at an exceptional level, and 13 Reasons Why simply excels in its overall cast. A story that focuses on multiple characters is a difficult task in itself but here the show represents each differing individual in such a way that we find ourselves immersed in their own personas, and captivated by the role they each play in the sad demise of Hannah. Dylan Minnette is outstanding as Clay, the character we essentially spend most time with, as he experiences so many altering emotions with each tape that he forces himself to endure, while Katherine Langford’s Hannah is a vital and engrossing young woman whose complexities make her such a striking character.

Each of the other students embroiled in the turmoil are also exquisite in their delivery of raw emotion, honesty and reactions to the dark and deeply heart-wrenching events unfolding as the tapes shatter lives and reveal shocking secrets with each episode.

Huge praise must also go to the overall representation of the story, with present and past events merging into one another in the school corridors and in places of note throughout town. These moments create such powerful emotion as Clay remembers those fond looks shared with Hannah across the school corridor, the time his and Hannah’s eyes lock over dance floor at the winter ball, and the scene of a pivotal car incident, among many others. It’s a fantastic device to add and layers the show with yet more emotional attachment and that all-important affecting core.

Put simply, 13 Reasons Why is one of the most relevant and defining television shows in recent times. Never shying away from the darkest subjects of teenage life and representing them in a truly respectable and yet eye-opening fashion, the show sends out a clear message and sticks to it from the very first episode. The cast here are truly powerful and there are so many scenes within that you’ll have stuck in your mind for months to come. A truly outstanding show that is just as important as it is heartbreaking.

13 Reasons Why is available on Netflix now.

If you are affected by the events covered in the show then help is available at 13reasonswhy.info