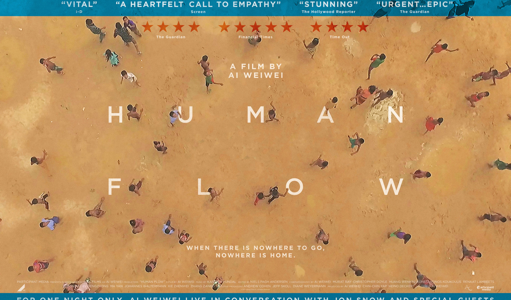 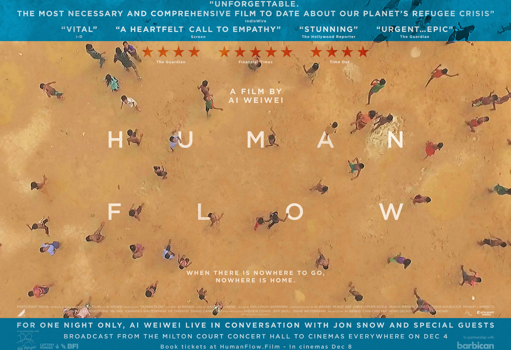 Altitude Film Distribution today announce renowned artist and activist Ai Weiwei will participate in a panel discussion following a screening of his highly acclaimed, ground-breaking documentary on the global refugee crisis, Human Flow.  The conversation, hosted by Channel 4 News’ Jon Snow and including special guests, is taking place on Monday 4th December and will be broadcast LIVE from Milton Court Concert Hall, London to over 200 cinemas across the UK and Ireland following simultaneous screenings.

The premiere screening and event, held in partnership with Help Refugees and the Barbican, will precede the cinema release of Human Flow across the UK and Ireland on 8th December.

Tickets for the Human Flow satellite event and general release are available at www.humanflow.film

Altitude have also launched the UK trailer and poster for the release of Human Flow.

Over 65 million people around the world have been forced from their homes to escape famine, climate change and war in the greatest human displacement since World War II.

Captured over the course of an eventful year in 23 countries, the film follows a chain of urgent human stories that stretches across the globe in countries including Afghanistan, Bangladesh, France, Greece, Germany, Iraq, Israel, Italy, Kenya, Mexico, and Turkey. Human Flow is a witness to its subjects and their desperate search for safety, shelter and justice.

From teeming refugee camps to perilous ocean crossings to barbed-wire borders; from dislocation and disillusionment to courage, endurance and adaptation; from the haunting lure of lives left behind to the unknown potential of the future. Human Flow comes at a crucial time when tolerance, compassion and trust are needed more than ever.  This visceral work of cinema is a testament to the unassailable human spirit and poses one of the questions that will define this century: Will our global society emerge from fear, isolation, and self-interest and choose a path of openness, freedom, and respect for humanity?

In honour of the subjects and stories of this ground-breaking film, Human Flow is fundraising to help provide vital support for those on the front lines of the global refugee crisis this winter, in partnership with acclaimed UK charity Help Refugees.  Donate to the The Human Flow Fund for Help Refugees at humanflow.film/takeaction

Human Flow will be released in cinemas across the UK & Ireland on December 8th 2017.