Megastar Akshay Kumar starrer ‘GOLD’ took the Box Office by storm as soon as it hit theatres. The film minted as high as Rs...

Megastar Akshay Kumar starrer ‘GOLD’ took the Box Office by storm as soon as it hit theatres. The film minted as high as Rs 25.25 crore on its opening day and became the third highest grosser of 2018. The film is now a part of the coveted 100 Crore club and Akshay Kumar has been lauded for his performance in the film.

Now, the film has added another feather to its cap by becoming the first ever Bollywood film to release in Saudi Arabia.

This May, to herald the launch of movie theatres in Saudi Arabia, the Kingdom held a private screening of “Black Panther” open to the public. The move to open movie theatres in Saudi comes as part of Crown Prince Mohammed Bin Salman efforts to reform various aspect of Saudi Arabia’s political, economic and social life which includes investing USD 64 Billion over the next decade in its entertainment sector. The Crown Prince is behind measures such as lifting a ban on women driving that will go into effect this summer, and bringing back concerts and other forms of entertainment to satiate the desires of the country’s majority young population.

Akshay Kumar took to Twitter to share the news of GOLD releasing in Saudi. He wrote, “The story of India’s first Gold medal victory for the first time in the Kingdom of Saudi Arabia. Happy to share, #Gold is the first ever Bollywood movie to release in the Kingdom Of Saudi Arabia, in cinemas from today! @excelmovies @ZeeStudiosInt”. 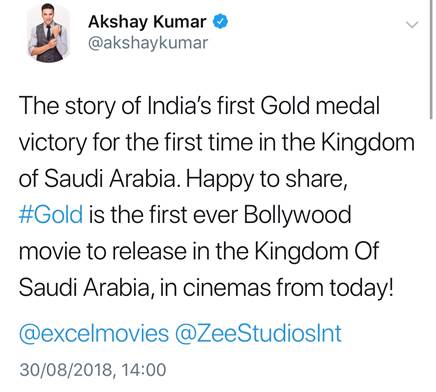 The story of GOLD highlights India’s emergence from the shadow of the British Empire as it meets the British hockey team on the field, this time as a nation of its own.

GOLD is an inspirational story of a team that fought all odds to bring their nation hope, pride and respect.