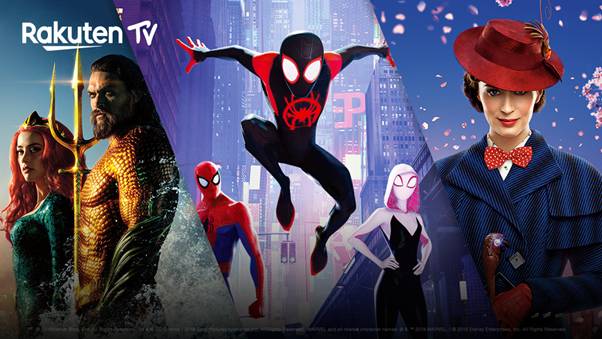 APRIL ON RAKUTEN TV: ALL THE BEST FILMS DELIVERED STRAIGHT TO YOUR SMART TV Fan favourite and award winning films Aquaman, Spider-Man: Into the...

ALL THE BEST FILMS DELIVERED STRAIGHT TO YOUR SMART TV

Fan favourite and award winning films Aquaman, Spider-Man: Into the Spider-Verse, Mary Poppins Returns and Bumblebee among this month’s new releases, all in 4K HDR

Rakuten TV launches into April with a selection of the very best new releases, all at the click of a button on your Smart TV.

This month, dive in with Jason Momoa as he stars as Arthur Curry, the human born heir to the underworld kingdom of Atlantis who must go on a quest to prevent a war between the world of the ocean and the land in Aquaman. Meanwhile, featuring an incredible voice cast including Mahershala Ali, Jake Johnson, Hailee Steinfeld and Nicolas Cage, don’t miss the Oscar award winning animation Spider-Man: Into the Spider-Verse, which sees teen Miles Morales, voiced by Shameik Moore, become the Spider-Man of his reality.

Practically perfect in every way Emily Blunt is the magical nanny in the delightful sequel to Mary Poppins as she delivers a joyous performance in Mary Poppins Returns, while John Cena and Hailee Steinfeld take us back to the ‘80’s in the fun-filled and action-packed Transformers origins film both critics and fans alike loved in Bumblebee.

In order of release:

Once home to the most advanced civilisation on Earth, the city of Atlantis is now an underwater kingdom ruled by the power-hungry King Orm. With a vast army at his disposal, Orm plans to conquer the remaining oceanic people, and then the surface world. Standing in his way is Aquaman who must retrieve the legendary Trident of Atlan and embrace his destiny as protector of the deep.

Teen Miles Morales becomes Spider-Man of his reality, crossing his path with five counterparts from other dimensions to stop a threat for all realities.

Hundreds of years after civilisation was destroyed by a cataclysmic event, a mysterious young woman, Hester Shaw, emerges as the only one who can stop London — now a giant, predator city on wheels — from devouring everything in its path. Feral, and fiercely driven by the memory of her mother, Hester joins forces with Tom Natsworth, an outcast from London, along with Anna Fang, a dangerous outlaw with a bounty on her head.

Decades after her original visit, the magical nanny returns to help the Banks siblings and Michael’s children through a difficult time in their lives

Detective Sherlock Holmes and Dr. John Watson join forces to investigate a mysterious murder at Buckingham Palace. It seems like an open-and-shut case as all signs point to Professor James Moriarty, the criminal mastermind and longtime nemesis of the crime-solving duo. When new twists and clues begin to emerge, the world’s greatest sleuth and his trusted assistant must now use their legendary wits and ingenious methods to catch the killer before the queen becomes the next victim.

On the run in the year of 1987, Bumblebee finds refuge in a junkyard in a small Californian beach town. Charlie, on the cusp of turning 18 and trying to find her place in the world, discovers Bumblebee, battle-scarred and broken.