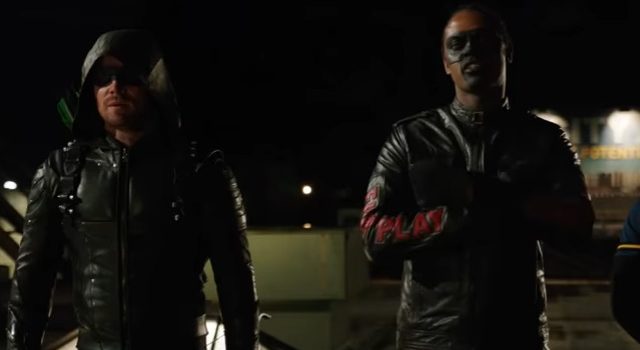 After last week’s episode of finding one’s self, it is only fitting for this episode to be all about redemption. Second Chances brings our heroes...

After last week’s episode of finding one’s self, it is only fitting for this episode to be all about redemption. Second Chances brings our heroes to discover everyone of them may have a past they might not agree with, but Team Arrow is all about forgiving themselves.

The second episode, after the midseason break, brings out two major players, Tina Boland (Juliana Harkavy) and Talia al Ghul (Lexa Doig). Team Arrow searches for a new candidate to enter the Black Canary mantle, and how coincidental that there is a meta that has that same exact screeching power, years of police work, and a vengeance filled story line.

The Green Arrow, Mad-Dog and Mr. Terrific must travel to Hub City to try and recruit the perfect candidate, but things go south when they find out that Tina is on a hunt to kill her lover’s killer. Its hard to replace Laurel Lance’s shoes, especially when Oliver dated her for half of his life, but how can one refuse a lovely trained woman set on a destructive path. Tina’s story line could perfectly be mirrored with Oliver’s past and was a fantastic tie into the team.

After a few unsuccessful encounters, Team Arrow finally convince Tina to help her in her quest, in hopes that she might change her ways and join the team. When they encounter her killer Sonus, and now meta mafia lord, they must use their skills to save Hub City from crime, and save Tina from her past. After a ridiculous fight sequence on top of a roof, where Oliver hangs on a helicopter to destroy it in one arrow, it is only team justice, team revenge and meta mafia lord left. Revenge is a strong team in Arrow, and usually always wins. In a fleeting effort, Oliver tries one last time to talk Tina out of killing Sonus, but when she has him at gun point with a trigger ready finger, it is hard to say no. Sonus might have died, but we have another excuse for the new Black Canary to talk about her vengeful past. The episode ends with Oliver back in Star City, and Tina entering his office looking for a second chance.

Ambivalent about Harkey’s performance, or perhaps the cliche Arrow story line, nothing about the new Black Canary was intriguing nor exciting. After time again, Arrow tries to push audiences the Black Canary character down your throats, and this was another perfect example. After the Earth-2 Laurel Lance just entered the picture and a new Black Canary joining the team, perhaps the show could have used a break between any bird related hero/villain. In addition, the overplayed revengeful past only seemed to drag on, whilst nice to have Oliver perhaps talk and relate to someone about this, we have had seasons all about revenge in the past. Furthermore, the pep talks done by Oliver seemed flat and were annoying. Only time can tell if Harkey will prove to be a valuable addition to the team.

Exploring Felicity’s hacktivist past, Diggle needs her help by hacking the NSA to exonerate Diggle of all his charges. It seems the show is taking Felicity down a different route, after an encounter with another hacktivist, Felicity reconsiders a past that she left behind. The IRL meetup with one of her fans may have inspired her to go back into her political hacking, and after last week’s episode of Felicity making orders, she may soon be stepping out of the shadows to make more of a direct impact onto the world. She gets a file, that ultimately saves Diggle and sets him free, but also has incriminating evidence on other possible corrupt organizations. Her brash decision making keeps it a secret from Oliver, and secrets and time never seem to bode well in the Arrowverse.

Whilst it will be great to see Diggle out of a small meeting room, it is still uncertain whether he will return as a staple character of Team Arrow, or continue his consultancy role for Oliver. It has been disappointing the way Diggle has been treated in recent episodes, equally disappointing with the lack of Adrian Chase as well. After last week’s charismatic performance, Adrian, and Rory (Rag-man) are once again put on the sidelines, to make the occasional comment here and there.

The best flashbacks were always about Oliver’s training on the island, and this week’s episode resembled that mystery and suspense. After the revelation of Talia joining Oliver, she decides to help Oliver in his quest to fulfill his promise to kill another crime lord. Doig’s performance stole the episode, the subtlety of her sadistic nature, and the majestic persona was unmatched. It is revealed that she will help Oliver, only for him to return to Star City and finally start the quest his father set on him. It was brilliant to once again see the flashbacks tie into his return to Star City, and ultimately put on the mantle of the Arrow. Finally, a meaningful flashback that also gives the Oliver the chance to put on his hooded costume in one of its first incarnations. After a quite average episode, it was surprising to see the flashbacks to be the best and redeeming factor to Arrow.