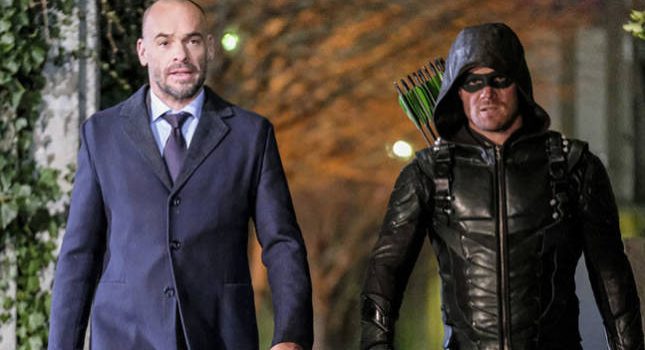 Following a rather strongly themed gun-focused episode last week, Arrow this week somewhat rolled back the clock to the good old original days of...

Following a rather strongly themed gun-focused episode last week, Arrow this week somewhat rolled back the clock to the good old original days of the series in focusing on the theme of heroes and their duty, as well as intertwining it with the focus on the flip side of normal individuals and their own actions and consequences of said things.

With such strong themes involved in this week’s episode we still got a taste of some typical villainy in the form of prison breakouts China White, Cupid and Liza Warner, with the trio looking to seek out the secret money stash of the now deceased Tobias Church. Admittedly, having a female villain team-up actually played out rather well for the show in a very comic book-esque way but ultimately they were very much the side show in favour for a focus on responsibility and duty which certainly saw the show at its best.

In the focus were Oliver and Detective Lance, both feeling the strains of responsibility in two very different ways. On Oliver’s side of things we would see the Green Arrow soon targeted once again by the ACU, meaning that he was technically seen as a vigilante once more, but also having to deal with the turmoil brought by Thea as she looked to ‘resolve’ the issue of Oliver’s girlfriend Susan looking to uncover Oliver’s hero identity. With Oliver reprimanding Thea for using her power for something that would mean ruin for a normal and innocent woman, we immediately got a taste of the morality questions often faced in the early days of the show and this served as a powerful throwback reminder that the showrunners haven’t forgotten these things. Add to that the ongoing reminder of Billy’s death and it really packed a punch on Oliver’s side of things.

Elsewhere, Captain Lance had to face the brutal truth that part of the reason for the prison breakout was his doing, with former officer Liza Warner having turned heel after witnessing Lance admit to working with the villainous Damien Darhk. Receiving a pep talk from – you guessed it – Thea, it would take a lot to convince Lance that Liza’s lost soul wasn’t completely his doing and that she was at the core a criminal. The dynamic and relationship between these two has grown well in this season and now that Thea seems to be back from her ‘trip’ it’ll be great to see how this develops further.

This week also saw some nice little sidelines furthering for Team Arrow that couldn’t go without mentioning, with Curtis’ outfit slowly becoming something so much cooler than he originally had (props to the costume department for that) and it was great to see our brand new Black Canary beginning to come out from the shadow of Laurel and really begin to make her mark within Team Arrow. That could be pivotal as it would seem that trusty Felicity may only be heading down a darker path that could well see her place on the team in jeopardy going forward…

As for our flashbacks for this particular episode, they came few and far between but the relationship between Oliver and Anatoli gave us enough to realise that the former was willing to risk his life for his Russian Bratva compadre and that sure is enough to keep us tiding over for another week!

With its fair share of important themes and focus on the core characters, The Sin-Eater delivered in all departments this week, never backing down from the more in-depth characterisation that originally made the show so engrossing. With hints of Prometheus still lurking and the villains of the week utilised in good fashion, this was one of the stronger episodes of the season and promises much more to come as we head to the closing stages of season five.