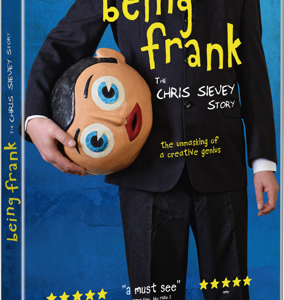 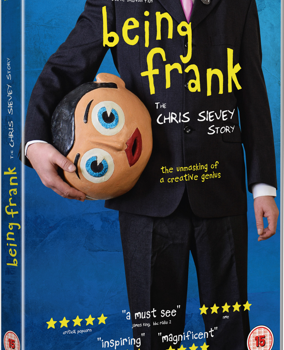 BEING FRANK: THE CHRIS SIEVEY STORY In Cinemas And Digital Download Now On Dvd & Blu-Ray With Extended Bonus Scenes From April 29

“Absorbing and tender…
Can we posthumously confer on Chris Sievey the title of national treasure?”
Hollywood Reporter
“A gem of a documentary.”
Evening Standard
“Moving and funny with amazing archive.”
Jon Ronson

Steve Sullivan’s funny and moving BIFA nominated documentary, BEING FRANK: THE CHRIS SIEVEY STORY, currently screening in cinemas throughout the UK and Ireland and available to download digitally, will be available to own on DVD and Blu-Ray, complete with a raft of fantastic new extras, on April 29. 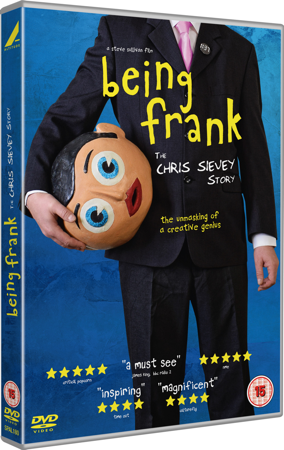 BEING FRANK: THE CHRIS SIEVEY STORY

is the official documentary about maverick Manchester comedian Frank Sidebottom, and the life and art of his hidden creator Chris Sievey. Frank Sidebottom, remembered fondly as the man with the papier mache head, was the court jester of the Manchester music and comedy scene for over 25 years but only a privileged few knew the man inside. BEING FRANK tells a twisted tale of split personalities – a suburban creative superhero with a fanatical desire to preserve the myth he created, and eventually having to battle against being consumed by his alter ego.
BEING FRANK: THE CHRIS SIEVEY STORY includes extensive archive from Chris’s personal collection of hundreds of boxes of notebooks, home movies, art and music. Insights from Chris’ family, friends, and colleagues, including Johnny Vegas, Jon Ronson, John Cooper Clarke, Ross Noble and Mark Radcliffe, finally reveal the unknown story of Chris Sievey – a songwriter, artist, comedian, husband, dad and wayward genius.
Director and producer Steve Sullivan has spent over seven years digging through Chris’s personal archive, interviewing friends and family and bringing BEING FRANK to the big screen.
Both the DVD and Blu Ray of Being Frank are crammed with fantastic additional archive and not bobbins bonus scenes. Expect to see more previously unseen home movies from the Sievey family. Hear more extraordinary tales of Chris Sievey’s creativity from the people that knew him best. And Frank’s mum is going to go up the wall and across the ceiling when she sees what he’s been up to in some of the bonus archive footage that’s included as extras. There are bonus scenes from Being Frank that didn’t make the film, but they’re definitely not bobbins. In fact, they’re ace. The Blu Ray disc contains an additional half hour of ultra rare nonsense not available anywhere else.
DVD & Blu-Ray Extras:
NOT BOBBINS BONUS SCENES
FANTASTIC ARHIVE
PLUS – a further 30mins of bonus footage (Blu-Ray only)
An official soundtrack album is also available. Released on Iain Lee’s 7A Records and packed with the best of the newly discovered Chris Sievey and Frank Side bottom rarities featured the film, the soundtrack will be available as a very limited (500 copies) picture disc vinyl album as well as on CD.
Bobbins, the first major exhibition of Frank Sidebottom & Chris Sievey will be a takeover of the entire ground floor of Manchester Central Library. Completely free to everyone and open throughout March and April 2019, the multimedia exhibition will feature the very best of Chris Sievey’s fantastic archive, as used in the film, Being Frank: The Chris Sievey Story. The exhibition is co-curated by Being Frank’s Steve Sullivan (filmmaker) and Dave Arnold (Art Director).
Post Views: 0
BEING FRANK: THE CHRIS SIEVEY STORY1 blue-ray release1 digital download release date2 DVD Release21 John Cooper Clarke1 Johnny Vegas2 Jon Ronson2 Mark Radcliffe1 Ross Noble1 Steve Sullivan1
Add a comment