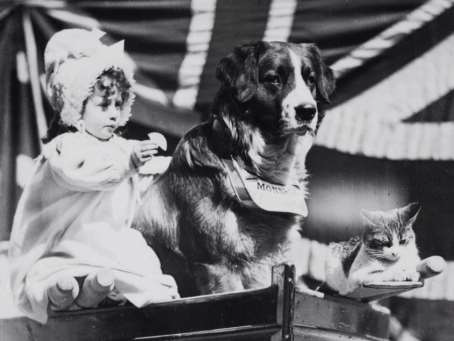 Sweeping away the veil of time, this Archive Gala will project Britain’s earliest films at their grandest scale (68mm, almost 4x the image size of regular 35mm film) on the nation’s biggest screen, the BFI IMAX. Festival-goers will be astounded by the sheer clarity, scale and spectacle of these incredibly rare surviving fragments of our first films, preserved by the BFI National Archive. Breathing new life into these filmic ghosts, superbly restored from the 68mm original nitrate prints under the meticulous and painstaking supervision of the BFI’s Conservation Centre, these films will be presented digitally in their fully fleshed, large format, high-definition glory for the first time in over 120 years.

The Great Victorian Moving Picture Show will reveal the quality, scope and scale of their technical ambition in developing a new media, combined with their avid curiosity in the world opening up around them. It also showcases the drive and media savvy of the showmen and film pioneers who sold audiences this new perception of reality. This unique opportunity promises to show the Victorians in a whole new light, blowing the lid off any preconceptions of our forebears and dispelling the image of the stuffy, stoic, stern Victorian for good.

In a night not to be missed, this one-off gala event will transport the audience back to the end of Victoria’s long reign, a time when competing showmen were projecting their moving picture shows in London’s great West End theatres. Among the frontrunners was the peerless William Kennedy-Laurie Dickson, whose British Mutoscope and Biograph Company enjoyed a long residency at the Palace Theatre of Varieties (now known as the Palace Theatre on Cambridge Circus, home to a different magician in Harry Potter and the Cursed Child). Of Scottish heritage, Dickson, who had worked for Thomas Edison, arrived in London in 1897 with his own very special USP: large-format films – the IMAX films of their day – aiming to outgun his rivals with his high quality pictures.

At only a minute or so long, these films range in date from 1897-1901, serving up an eclectic spread of subjects, from gorgeous panoramic vistas to dizzying ‘phantom rides’, from music hall turns to the pomp of royal pageantry, from the bustle of the Victorian street to genuine dispatches from the Boer War. The night has been programmed by and will be presided over by BFI silent film curator Bryony Dixon, with music from composer/pianist John Sweeney and his Biograph Band.

BFI Head Curator, Robin Baker says, “The quality and clarity of these new restorations is extraordinary. They offer an immediacy and connection with the Victorian period that I have never felt before. You almost feel as if you can reach out and touch the past. The Great Victorian Moving Picture Show provides audiences with an exclusive first look at some of the 700+ Victorian films newly digitised by the BFI National Archive that we will launching online in 2019 to mark the 200th anniversary of Queen Victoria’s birth.”

The Great Victorian Moving Picture Show features films by the British Mutoscope and Biograph Company, Prestwich and Gaumont all restored in 2018 by BFI National Archive in collaboration with EYE Filmmuseum and Haghefilm. The restoration of the films was supported by The Eric Anker-Petersen Charity. With additional support from the Michael Marks Charitable Trust and the John S. Cohen Foundation.

The BFI is the lead organisation for film in the UK with the ambition to create a flourishing film environment in which innovation, opportunity and creativity can thrive by:

The BFI is a Government arm’s-length body and distributor of Lottery funds for film. The BFI serves a public role which covers the cultural, creative and economic aspects of film in the UK. It delivers this role:

Founded in 1933, the BFI is a registered charity governed by Royal Charter. The BFI Board of Governors is chaired by Josh Berger.

BFI London Film Festival is Britain’s leading film event and one of the world’s best film festivals. It introduces the finest new British and international films to an expanding London and UK-wide audience and attracts significant international film industry participation. LFF is a compelling combination of diverse films, red carpet glamour, friendly audiences and vibrant exchange. LFF provides an essential profiling opportunity for films seeking global success; promotes the careers of British and international filmmakers through its industry and awards programmes and positions London as the world’s leading creative city.

About the BFI National Archive

The BFI National Archive was founded in 1935 and has grown to become the one of the largest and most important collections of film and television in the world with over 180,000 films and 750,000 television programmes. For over 80 years the BFI has been an international leader in film preservation and guardian of Britain’s unparalleled film and TV heritage. The BFI is an innovator in presenting films to audiences in new and dynamic ways, from cinemas to film festivals, outdoor events to online video-on demand. At the heart of all its activities is the BFI’s central aim to ensure that everyone in the UK has access to the widest possible range of film and their own film heritage.

That heritage includes all time great British directors Alfred Hitchcock, David Lean and Powell and Pressburger; and the rich vein of documentary filmmaking, in which Britain led the world, including the lyrical work of Humphrey Jennings. The archive also boasts a significant collection of filmmakers’ papers as well as extensive stills, posters and production and costume designs along with original scripts, press books and related ephemera.

Expert teams undertake the time-consuming and complex task of restoring films at the BFI John Paul Getty Jr Conservation Centre in Hertfordshire. The BFI’s most precious film materials are kept in optimum conditions in the world-leading Master Film Store in Warwickshire.

American Express connects Cardmembers to the kinds of rewarding experiences and opportunities that matter to them and their businesses. Through Amex Invites, Cardmembers have access to presale tickets, as well as the best seats and exclusive offers at some of the UK’s most sought-after entertainment events via partnerships with a range of entertainment institutions including AEG, Live Nation, Somerset House, The British Film Institute and The National Theatre. Amex Invites is just one example of the powerful backing that American Express provides its customers.