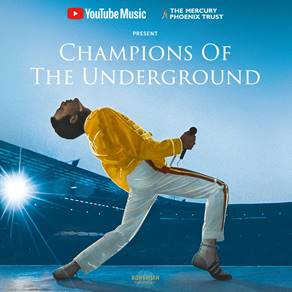 Champions of the Underground: YouTube Music to celebrate the legacy of Queen in the a unique Tube performance site in London on Wednesday 24th October

WHAT: Opportunity to see artists, tribute bands and musicians performing as YouTube Music celebrates the legacy of Queen, to coincide with the UK release...

WHAT: Opportunity to see artists, tribute bands and musicians performing as YouTube Music celebrates the legacy of Queen, to coincide with the UK release of the Bohemian Rhapsody film (24th October). For one day only the takeover of 33 locations on the London Underground – in partnership with Mercury Phoenix Trust, fighting AIDS worldwide, and Transport for London (TfL) – will have artists, tribute bands and musicians performing Queen hits to entertain the public.

The total of all on-the-day monetary contributions will be matched by YouTube Music and donated to the Mercury Phoenix Trust – founded by Brian May, Roger Taylor and their manager Jim Beach in memory of rock band Queen’s iconic lead singer Freddie Mercury who died in 1991 from AIDS.

For those who can’t attend in person, YouTube Music app listeners will see a Queen ‘shelf’ with access to the film’s soundtrack and the back catalogue of the band.