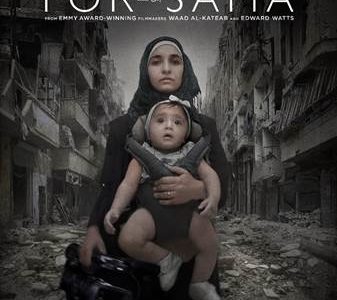 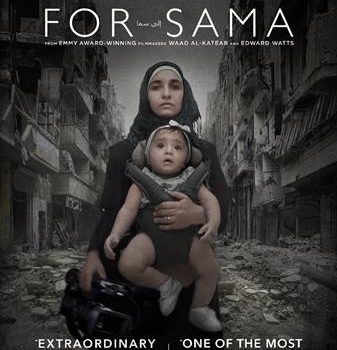 CRITICALLY ACCLAIMED DOCUMENTARY FOR SAMA SET FOR SEPTEMBER UK THEATRICAL RELEASE “There simply hasn’t been a film like it before” The Times *****  FOR SAMA...

FOR SAMA is a Channel 4 News & ITN Productions feature documentary for Channel 4 and PBS FRONTLINE.

Republic Film Distribution has confirmed that it will be releasing festival favourite FOR SAMA in cinemas across the UK and Ireland on the 13thSeptember. Winner of the Golden Eye Documentary Prize at this year’s Cannes Film Festival, Grand Jury prize for Best Documentary and the Audience Award at SXSW, the film has been a huge hit on the festival circuit. Directed by Emmy award winning filmmakers Waad al-Kateab and Edward Watts, FOR SAMA is their first feature documentary, revealing an intimate and epic journey into the female experience of war.

A love letter from a young mother to her daughter, the film tells the story of al-Kateab’s life through five years of the uprising in Aleppo, Syria as she falls in love, gets married and gives birth to Sama, all while cataclysmic conflict rises around her.

Her camera captures incredible stories of loss, laughter and survival as she wrestles with an impossible choice – whether or not to flee the city to protect her daughter’s life, when leaving means abandoning the struggle for freedom for which she has already sacrificed so much.

Prior to its UK theatrical run, the film will open in U.S cinemas on the 26th July and receive a broadcast premiere on Channel 4 and PBS Frontline in the autumn. 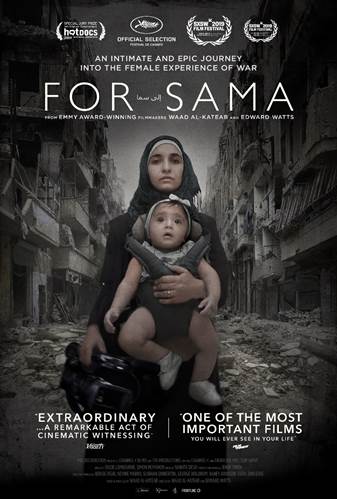 FOR SAMA is in cinemas 13 September

Formed in London in 2018, Republic is a boutique film distributor that connects independent films with UK audiences, working across theatrical, digital and TV. Company founder Zak Brilliant has strategised more than 200 film campaigns in his career, overseeing the release of commercial, arthouse and prestige fare, delivering over £150M at the UK box office. Recent releases for Republic include the award-winning Jellyfish, directed by James Gardner starring Liv Hill, Freak Show directed by Trudie Styler starring Alex Lawther and Dead in a Week (Or Your Money Back) directed by Tom Edmunds starring Tom Wilkinson.  Upcoming for 2019 is the Sundance Audience Award Winning film Brittany Runs a Marathon from Amazon Studios, directed by Paul Downs Colaizzo starring Jillian Bell.

Channel 4 is a publicly owned yet commercially funded public service broadcaster and has a remit to be innovative, experimental and distinctive. Its public ownership and not-for-profit status ensure all profit generated by its commercial activity is directly reinvested back into the delivery of its public service remit. As a publisher broadcaster, Channel 4 is also required to commission UK content from the independent production sector and currently works with around 300 creative companies across the UK every year. Documentaries and current affairs are key areas for the channel, and it’s international coverage has won numerous international awards.

ITN Productions is the award-winning factual arm of ITN, producing films and series for major networks in the UK and internationally. Our programmes have received Oscar and Nobel Peace Prize nominations, as well as winning multiple BAFTA, Emmy and Royal Television Society awards. We are one of Britain’s leading documentary producers, and our film Children on the Frontline is the most decorated Channel 4 documentary of all time.

Channel 4 News is a multi-award-winning nightly news programme in the UK. Ever risk-taking in its high-impact, agenda-setting journalism, Channel 4 News is consistently lauded for going beyond the headlines to fearlessly tackle the stories that often go unreported elsewhere. It is the most distinctive video news provider in Britain on every major output platform and the biggest news programme on social media in the UK with a digital viewership of half a billion minutes viewed on Facebook and YouTube so far in 2019.