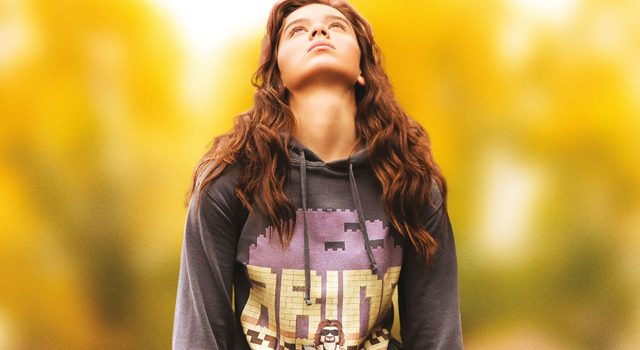 Steinfeld stars as the awkward Nadine, the kind of inexplicably unpopular student we’ve seen many times in American teen movies – too pretty to actually be a social outcast if it were real life, but the film pulls off convincing us she is through her social awkwardness, her off-beat dress sense and her relationship with her super-popular brother. Indeed Nadine is actually a surprisingly well-rounded character; a sympathetic mix of arrogance and inadequacy, she is at times both irritating and hilarious. Like Juno before her, she thinks she’s a girl out of time, that nobody understands her, but the excellent script keeps her feeling like an actual real-life person. Everybody either was or knew somebody that felt out of step with their peers at that age, and despite having seen similar characters in films before, she somehow still feels fresh and original.

When her only friend starts dating her brother (played by the impossibly good looking Blake Jenner, rounding out an excellent 1-2 punch of 2016 coming-of-age movies with this alongside Everybody Wants Some!!), she’s more alone than ever. Enter reluctant mentor Mr. Bruner (Woody Harrelson), her English teacher who really tries to stay out of her life. As The Hunger Games fans know, gruff Harrelson is always great, and here he’s even more of a reluctant mentor than Haymitch, but still without bordering on caricature.  We get just enough of Mr. Bruner and of his comedic and playful relationship with Nadine to be a perfect antidote to weightier issues and Nadine’s worrying and self-pity.

Though clearly Steinfeld’s film, the supporting performances from Harrelson, Jenner and a sweet turn from Hayden Szeto as a fellow classmate all make very strong cases for being the film’s standout performance.

Despite the DVD cover making it look like any teen movie ever made, The Edge of Seventeen is anything but. Whilst it’s clear the writer and first time director Kelly is a fan of teen classics from Fast Times at Ridgemont High through to Clueless, this movie somehow manages to follow those tropes and join those ranks without feeling like a mere replica. Whereas 80s teen movies are huge on nostalgia, whether first-hand or second-hand when watched today, this feels completely current – steering clear of being cheesy and actually showing what it’s like to be a teenager for many people. Maybe scenes of social media awkwardness, the costumes and the way of talking will all feel just as antiquated in decades to come, but that will surely only add to this film’s charm.

It’s the awkward scenes, whether in school, at parties, or online in which this movie works best; it balances drama and comedy, expertly capturing the awkwardness of being a teenager, and it would be hard to believe that anybody who’s been through school couldn’t relate to some of the situations Nadine gets herself into.

The Edge of Seventeen is so much smarter than it had any right to be, more touching and more funny. Through its sharp script, cast of fleshed out characters and amazing performances, Kelly has crafted a surprising coming-of-age gem.

The Edge of Seventeen is available on Digital Download from 25th March, and on DVD from 27th March.