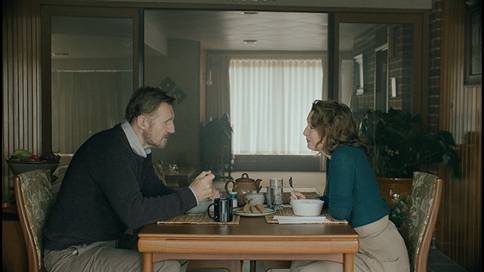 The first look image has been released from Lisa Barros D’Sa and Glenn Leyburn’s NORMAL PEOPLE, starring Lesley Manville and Liam Neeson, based on the script by celebrated Irish playwright Owen McCafferty. NORMAL PEOPLE is a Canderblinks Films and Out of Orbit production, produced by the BAFTA award-winner and BFI Vision Awardee 2016, Brian J. Falconer for Out of Orbit, David Holmes for Canderblinks Films and Piers Tempest for Tempo Productions.

Joan and Tom have been married for many years. There is an ease to their relationship which only comes from spending a life time together and a depth of love which expresses itself through tenderness and humour in equal part. When Joan is unexpectedly diagnosed with breast cancer, the course of her treatment shines a light on their relationship as they are faced with the challenges that lie ahead and the prospect of what might happen if something were to happen to her. NORMAL PEOPLE is a story about love, survival and the epic questions life throws at each and every one of us.

Creative Artists Agency’s (CAA) Media Finance group, which arranged financing for the film, represents its domestic distribution rights, with Bankside Films handling sales throughout the rest of the world.

Glenn Leyburn by Independent Talent and Owen McCafferty by The Agency (London) Ltd.

Canderblinks Films was set up by creative partners Lisa Barros D’Sa, Glenn Leyburn and David Holmes to produce bold, innovative film and television across the genres: stories with edge, intelligence, heart and the power to move people. Producers of several award-winning films including the critically-acclaimed Good Vibrations, Canderblinks Films are currently developing a slate of exciting new feature and television projects with a range of international collaborators.

About Out Of Orbit

Established in 2011, the BAFTA award winning Out of Orbit is one of the most exciting production companies to emerge from the booming Northern Ireland Film and Television Industry. Currently supported by a BFI Vision Award, Out of Orbit’s debut feature, The Dig, directed by Andy and Ryan Tohill won Best Film at the 2018 Galway Film Fleadh, going on to have its North American Premier at TIFF and its Asian Premier at Busan with XYZ Films handling North American Sales.

Previous productions include the 2015 BAFTA award winning and Academy Award® nominated Boogaloo and Graham and the 2016 Royal Television Society (RTS) Award winning We Are You.

Based in Belfast, Northern Ireland, Out of Orbit are currently developing a diverse feature and television slate with a focus on live action drama. Out of Orbit champion both established and emerging talents, recently producing debut shorts for Stacey Gregg (Mercy), Helen Warner (Pollen) and Dianne L. Campbell (El Hor).

In 2017 Tempo credits include Churchill starring Brian Cox, Miranda Richardson, John Slattery and Ella Purnell released by Lionsgate on the UK. Venice and Toronto premiering The Journey starring Tim Spall, Colm Meaney, Toby Stephens, Freddie Highmore and John Hurt, and The Wife starring Glenn Close, Jonathan Pryce and Christian Slater which world premiered at the Toronto Film Festival, with Sony Pictures Classics releasing in 2018. Tempo  have just completed Driven, which was the closing film at the 2018 Venice Film Festival, starring Jason Sudeikis, Lee Pace and Corey Stoll and the feature documentary Pendergrass in partnership with BBC Films, which will close the Philadelphia Film Festival in November 2018.

Based in London, Bankside Films is a leading international sales and production company which can also access production finance through its sister company Head Gear Films.  The company seeks to produce, finance and distribute distinctive films of quality for release in all media.

Bankside have also worked on Yolanda Ramke and Ben Howling’s Cargo, which is about to be released worldwide by Netflix, Amma Assante’s Belle, Freeheld with Julianne Moore and Ellen Page, Peter Chelsom’s Hector & The Search For Happiness and John Michael McDonagh’s War On Everyone.

As one of the UK’s most prolific production and investment companies, Head Gear Films has supported over 250 projects, including such notable film titles as Black Mass, Freeheld, Trespass Against Us, Churchill, Where Hands Touch, Keepers and War on Everyone. As well as its feature film activities, Head Gear is involved in financing video games, theatrical productions, comic books, documentaries and other forms of media. Head Gear has a truly international footprint, and is active in producing and financing projects in many territories around the world.

Northern Ireland Screen is the government-backed lead agency in Northern Ireland for the film, television and games industries, driving global growth through boosting our economy, celebrating our culture and enhancing our children’s education.

The agency is now in Phase 2 of its Opening Doors, with a clear vision to transform the screen industries in Northern Ireland, ensuring that we have the strongest screen industry outside of London in the UK and Ireland by 2024, supported by vibrant and diverse cultural voices that are recognized and celebrated equally at home and abroad.

Northern Ireland Screen is a company limited by guarantee, currently employing 25 people and governed by a Board of thirteen Directors. The Chairwoman is Rotha Johnston and Kenneth Branagh is Honorary President.

The BFI Film Fund supports world-class UK filmmaking from talent and film development, through to production and audience development across exhibition, distribution and international sales, investing over £50 million of National Lottery funding a year.

The BFI is the lead organisation for film in the UK with the ambition to create a flourishing film environment in which innovation, opportunity and creativity can thrive by: