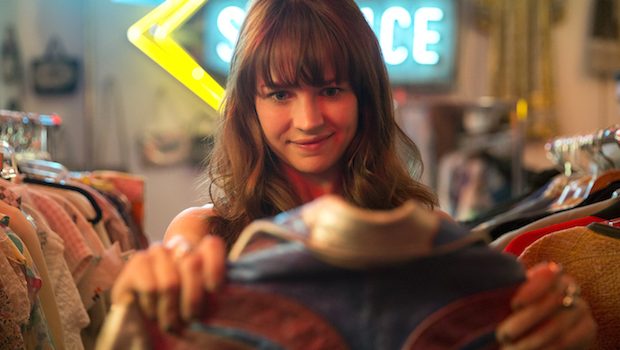 The Netflix online library is a landscape that is forever changing, and with the online streaming company venturing now on a regular basis into...

The Netflix online library is a landscape that is forever changing, and with the online streaming company venturing now on a regular basis into their own Originals by way of both films and television shows it poses a fascinating prospect in seeing what they have to offer next. Within such a vast, growing line-up, Netflix has always been capable of bringing forth some truly great comedy and their latest offering, Girlboss, is no different. With its release on 21st April, we were granted access to the first four episodes of a serious which has serious character, plentiful laughs and a refreshing take on a true life story of going from nothing to inquiring your dreams.

Sophia (Britt Robertson) is a rebellious and care-free young woman living in San Francisco looking to make her mark in life. Having failed in pretty much every job she’s been in and constantly disappointing her father (Dean Norris), Sophia’s love for fashion is clear for all to see and after a chance purchase of a particular classic biker jacket it starts a whole new chapter in her life.

Having made a vast profit on her purchase via eBay, Sophia begins her own selling business on the internet and slowly starts to realise that even living your own dream may not be plain sailing. Helped along by her best friend Annie (Ellie Reed) and love interest Shane (Johnny Simmons), Sophia’s own Nasty Gal brand is about to blow up to huge proportions and this is her story of challenges, successes and much more.

Executive produced by Charlize Theron and brought to life by the creative talents of Kay Cannon (Pitch Perfect), Girlboss was always going to be an intriguing and exciting proposition and judging from the opening few episodes it has all the ingredients to be the next great show that you’ll binge watch in no time at all. From the very get-go, the show boasts exceptional dialogue which is straight out of Cannon’s Pitch Perfect-esque repertoire and never holds back. It’s regularly witty, remarkably clever and simply magnetic. Cannon’s writing talents shine through, without a doubt, but it’s all led by a superb performance from leading lady Britt Robertson.

Having experienced a rather mixed bag of career roles so far, it almost feels natural for the young actress to turn to such a role, breaking into a rebellious and feisty individual of whom we’ve seen little of lately. Quickly moving to erase the bitter memories of her latest disappointing cinematic venture The Space Between Us behind, Robertson here is arguably at her best, uttering profanities, stealing property and changing up her usual familiar good girl image. And it proves inspired, with the actress clearly having a ball as she sticks a middle finger up to the world in character and guarantees that we’ll be right behind her from the very first episode onwards.

Robertson impressive turn is also aided by some great supporting cohorts too. Ellie Reed’s Annie is the epitome of a best friend who will help Sophia conquer all the bumps in the road, with all the sass and risqué life choices thrown in, while Johnny Simmons’ Shame adds that level of meaningful balance that ensures the comedy maintains that realistic edge rather than an all-out outrageous feat of joke barrages and silliness.

Within the first four episodes of the show you’ll fall hook, line and sinker for Girlboss if only for its swift movement on getting to know Sophia and her blossoming empire. From an introduction into who the real Sophia is, to an episode focusing solely on getting a wedding address to a client by way of a fear of bridges and a red wine drinking session, Girlboss is a charming and feel-good show like few others out there. Robertson will stay on our radar and you’ll be binge-watching this in no time.

Girlboss is available on Netflix from 21st April.