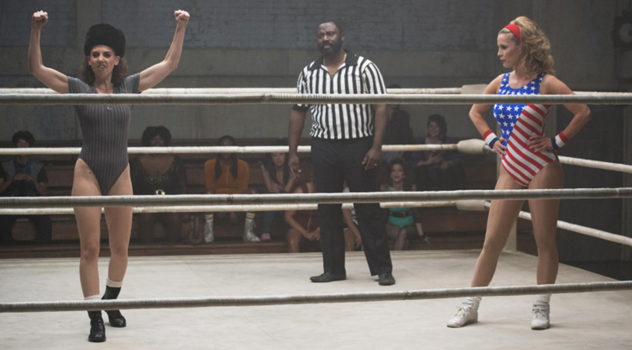 Big hair and big personalities, the ladies of the latest Netflix Original series don’t just “glow”, they positively shine. A fictionalized series based on...

A fictionalized series based on an all-female wrestling show of the 80s might not seem like a big hit on paper, but when you hear the show’s creators are also credited with Homeland and Orange is the New Black, suddenly the interest is piqued a little.

With a diverse cast headed up by Community’s Alison Brie, Glow manages to tick plenty of boxes in its short 10 episode season and proves once again in the hands of the right people, a female focused comedy drama is an easy recipe for success. Single handedly pleasing fans of wrestling, fans of kick-ass ladies, fans of original comedy and fans of the 80s, it has a little something for everybody.

The familiar face and reliable hands of Alison Brie ensure that this is an easy series to get into, despite the rest of the cast being mostly unknowns. The eagle-eyed might spot that Ellen Wong, who played Knives in Scott Pilgrim vs the World is also in the cast list, as is British singer Kate Nash (remember her, she sang that ‘Foundations’ song that was everywhere in 2007), and die-hard wrestling fans can also be treated to an appearance from Kia Stevens, aka Kharma in the WWE.

Brie plays Ruth Wilder, a struggling actress who receives an invitation for an audition in a fledgling wrestling promotion called the ‘Gorgeous Ladies of Wrestling’. Off the screen, Ruth has been having an affair with her best friend’s husband, and things take an interesting, dramatic turn when the wife, Debbie (Betty Gilpin) is also cast, with the show’s producers believing that their real-life drama will be just what the show needs to make it a hit.

The concept of a show about a show is not a new one, but Glow succeeds in the sense that the characters are instantly likeable, the story is unique and different enough in order for it to stand out from the rest of the pack, and the nostalgic 80s feel is undoubtedly charming. Few 80s throwback shows nail the aesthetic as well as Glow does, and even the way it is shot and presented feels authentically retro.

Glow is a show which does take a little while to settle into its stride, but it is in the 5th episode, titled “Debbie Does Something”, that it finally clicks into place. A lot of emphasis before this episode is placed on the ladies trying to find their characters for the ring, eventually succumbing to stereotypes to great comedic effect, and whilst this portion isn’t without merit, it does feel like it is slightly missing the sparkle. Episode 5 onwards however, the series feels like it has found its flow and winning formula, the ladies have their characters, and the realisation that the world of wrestling is essentially just a soap opera, helps the story to slot into place for us as the audience, as much as it does for the characters.

A short season will so often be a blessing and will certainly be welcome for binge-watching fans, but in the case of Glow it really only feels like it has just found its fire when the season is ending which is a shame. However, this does bode extremely well for any future seasons as it feels like the sort of series which can only get better and better.

It isn’t perfect, but it sure is fun and at it’s best, it doesn’t just glow, it positively shines!