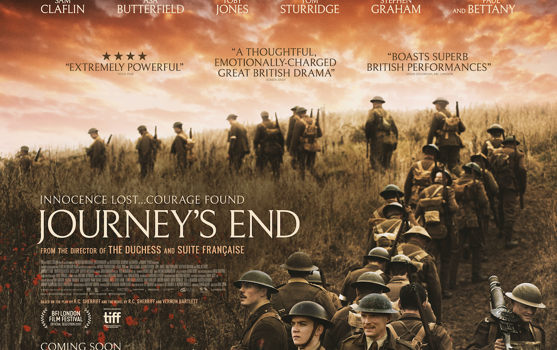 The first poster for the upcoming release of the big screen version of Journey’s End has been unveiled and it boasts an impressive...

The first poster for the upcoming release of the big screen version of Journey’s End has been unveiled and it boasts an impressive cast and some striking imagery from a war film that promises much intrigue.

Based on RC Sherriff’s play and novel of the same name, Journey’s End is set in March 1918 as C-Company, led by a war-weary Captain Stanhope (Sam Claflin) arrives in northern France to take its turn in the front-line trenches. Told that a German offensive is imminent Stanhope drowns his fears in whisky whilst the officers (Paul Bettany, Stephen Graham, Tom Sturridge) and their cook (Toby Jones) attempt to distract themselves in their dugout with talk of food and life before war. They are joined by Raleigh (Asa Butterfield), a young new officer fresh out of training excited about his first real posting, and a chance to serve under Stanhope. Raleigh’s naivety serves as a stark contrast to the other men’s impending fear as the tension rises and the attack draws ever closer.