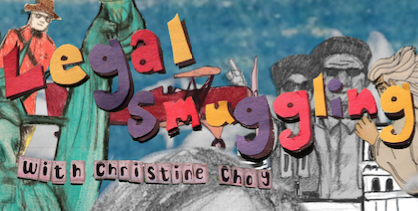 Nearing its 40th anniversary, Sundance Film Festival is underway once again as it showcases an exciting and eclectic range of independent filmmaking. Gracing the...

Nearing its 40th anniversary, Sundance Film Festival is underway once again as it showcases an exciting and eclectic range of independent filmmaking. Gracing the Documentary Short strand of this year’s programme, the brotherly duo Noah and Lewie Kloster provide us with this distinct debut feature Legal Smuggling With Christine Choy, featuring the female filmmaker who was Oscar-nominated in 1987 for Who Killed Vincent Chin?

Clocking in at a mere four minutes and brimming with imaginative and textured animation as its title credits draw comparisons with the quirky style often associated with classic cartoon shows, the admittedly simplistic plot revolves around a chain smoking Choy as she reflects in the haze of New York City.

Beginning at the age of sixteen whilst lamenting the lack of Asian movie stars to be influenced by back in her homeland, the fondness for smoking ultimately cancelled out the ‘wear high heels and stuffed bra’ cliches driven into her by fellow women.

Longing for the year 1975 when the price for such a vice was a far cry from the extortionate amount she is now reluctant to pay in the current climate, we are treated to the creative and perhaps crazy lengths the Korean-born filmmaker would go to obtain her beloved Benson and Hedges for a reasonable rate, as she mentions using abacuses, visiting duty free shops and contacting travel agents for a trip to Toronto.

The piece is ultimately reliant on the passion and personality that Christine Choy’s narration instills into the short with her razor sharp wit, guiding us through a lean story that for all its fun and element of risk carried out by its central character, is hardly brimming with depth or insight.

Yet the visual craftsmanship displayed by Noah and Lewie Kloster here is undeniably impressive, as its vivid and kooky stop-motion style compliments Choy’s persona wonderfully, with the dizzying rainbow-coloured zooms as she maps out her plans in the airport and the descending of cotton wool as planes swoop by proving particularly inspired.

Legal Smuggling With Christine Choy is an often amusing albeit throwaway short, that may not necessarily leave you craving a return trip with its narrative limitations. But as a stylistic showcase, the Kloster Brothers may just be worth keeping an eye on.