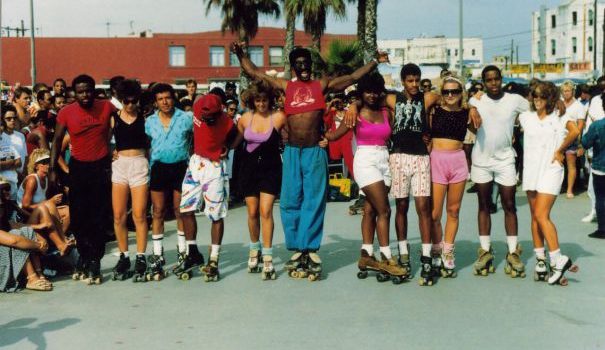 Energetic, thoughtful, and surprisingly relevant look at the explosion of a pop culture phenomenon on a sun-drenched Venice Beach in the 1980s. It’s undeniably...

Energetic, thoughtful, and surprisingly relevant look at the explosion of a pop culture phenomenon on a sun-drenched Venice Beach in the 1980s.

It’s undeniably a bit of a niche topic for a documentary, and indeed the issues this documentary ends up exploring, seem a far cry away from the carefree world of roller dancing. Being the focus for an entire film might seem questionable, however Roller Dreams actually ends up being a big surprise, exploring issues of racism, police brutality, gentrification, and faded dreams, as much as it does the specialized sport.

Indeed, the slick opening shot of present day skaters slightly resembles a sportswear brand or perfume advert, but this soon paves way to an interesting and highly personal story of a group of skaters who had a large part to play in the Venice Beach scene. Known affectionately as ‘the O.G.’, we’re introduced to some of the key figures with some contagiously energetic home videos of the skaters doing their thing before delving a bit further into their stories. We spend the most time with Mad; the alpha male, and arguably best dancer of the group, and Sally; the long-legged dance partner of Mad who felt a strong affinity to the predominantly black community of Venice Beach despite her Middle Eastern background.

Told in traditional documentary style with handheld footage interspersed with talking head interviews, what begins as pretty standard fare, ends up with a focus that is frustratingly yet necessarily relevant. Framing the Venice Beach skaters with the racially charged riots of the 60s and early 90s, very much emphasises that this joyful expression of youthful exuberance, with diversity, music, and acceptance at its core, was a short-lived affair, and indeed it is observed that racism and police brutality are more present than ever.

The initial joy and energy of the skaters eventually breaks down, as the group go their separate ways, and their skating haven is in itself broken apart after increasing police tensions. Whilst it would be easy enough to just see the roller dancing phenomenon as something of its time, this film gently equates its disappearance to the growing inequality and mistreatment of black youths by the police, and the rapidly changing youth culture and the musical shift that came with this. Sally reminisces how the music they danced to, all 80s groove and soul, suddenly disappeared and in its place came hip-hop and aggressive gangster rap. Whilst there’s a touch of “kids today” about this observation, it never comes across as being pretentious and actually does a great job of demonstrating the shift in time, to bring us up to the present day.

Where it spends time with ‘the O.G.’ in the present day, is perhaps where this film is at its most powerful. We see Sally, struggling to make ends meet and living in a garage, becoming emotional when she describes what it is like to be this poor. Another of the skaters, Larry, wanders around his old neighbourhood, remarking on the changing landscape and the throwaway quality of the houses and the people who live there. The once alpha male, Mad, has perhaps the most stark change in his older years. Having turned his back on skating, he still yearns for his youth and to be who he once was, but his health slows him down, and the desire to be nothing less than completely perfect stops him from being able to enjoy what was once his life.

The issues of “whitewashing” in Hollywood sadly seems to be coming up more and more nowadays, and indeed it is rather unexpectedly explored in Roller Dreams. The rise of roller dancing inevitably piqued Hollywood’s interest as they created a slew of roller-themed movies, all with white leading men and ladies, yet it was members of ‘the O.G.’ that trained them, and even were asked to be lower body doubles for the white cast. The notion of an exciting minority subculture being exploited for profit is surprisingly powerful, and will prompt questions about the way the film industry still treats minorities. It can be hoped however, that Roller Dreams will be able to reach an audience, telling the true story, and once again bringing light to some timely, and relevant issues.

Fun, energetic, and full of joy, Roller Dreams equally never shies away from some emotive and important issues, and for this reason it is definitely one to make time for. It might have some stiff competition, but it would be great to see this film make some waves during awards season, proving that some of the most memorable stories can come from the most unexpected of places.