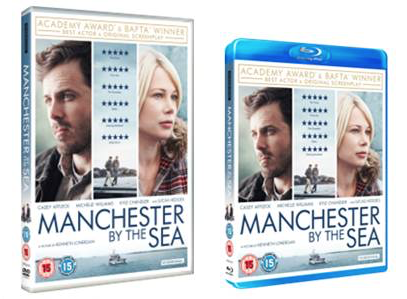 Fresh from its successful Academy Awards in which Casey Affleck won Best Actor and director Kenneth Lonergan notched up the win for Best Original...

Fresh from its successful Academy Awards in which Casey Affleck won Best Actor and director Kenneth Lonergan notched up the win for Best Original Screenplay, the fantastic Manchester By The Sea now has its home entertainment release confirmed.

The film that also won the same two awards at this year’s BAFTAs is set to be available on Digital Download from 8th May, with the Blu-ray, DVD and On Demand release coming a week later on 15th May, courtesy of Studiocanal. For more information on the release you can see all the details below.

You can also read our review for the film here.

Deeply moving, MANCHESTER BY THE SEA truly encompasses the regret and despair of grief that can bring people together stronger. The film is an emotional tour de force, that has rightly garnered plenty of awards attention including two Academy Award® wins (Best Actor – Casey Affleck and Best Original Screenplay – Kenneth Lonergan), as well as four further Academy Award® nominations (Best Supporting Actor, Best Supporting Actress, Best Director and Best Picture), and Golden Globe and BAFTA wins, firmly cementing MANCHESTER BY THE SEA as one of the year’s most essential home entertainment releases.

Manchester by the Sea Release Details