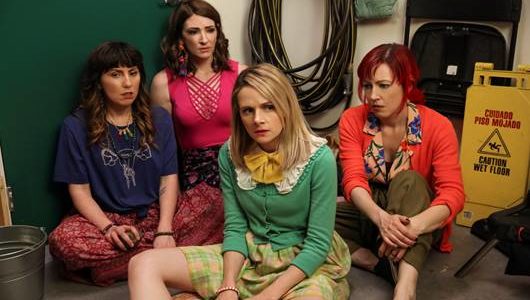 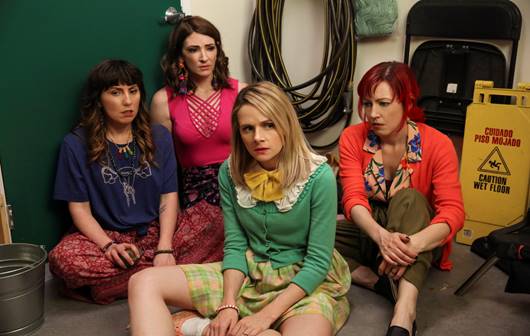 This upcoming season will be the final one, and “Teachers” delivers 10 hilarious episodes. The premiere episode takes a poke at the Betsy DeVos “guns for grizzlies” quote, where a neighbor moves in across the street from Fillmore Elementary school and he has a pet grizzly bear! Using the bear as an allegory for gun control, the teachers attempt to help the neighbor and their local councilwoman understand the danger of having a 600 lb. bear hanging out on the lawn across the street.

QUOTES FROM THE PREMIERE EPISODE:

Ms. Cannon: “Oh, looks like we got a new neighbor.”

Ms. Snap: “Ugh, good! That old couple was so annoying. The husband getting wheeled out for dialysis every day… it’s like we get it you’re dying.”

Councilwoman Taylor: “You want me to ban bears?”

Ms. Bennigan: “No, never said that. Didn’t even imply it.”

Councilwoman Taylor: “What’s next? You don’t like the way some Shih tzu looks at you so we outlaw ALL shih tzus?”

Five fearless, funny females helm the sharp-witted comedy series, “Teachers,” which revolves around a group of elementary school teachers who are trying to mold the minds of America’s youth, but don’t have their own lives together at all. The series stars and is written and executive produced by improv group The Katydids – Caitlin Barlow (Ms. Cannon), Katy Colloton (Ms. Snap), Kate Lambert (Ms. Watson), Katie O’Brien (Ms. Bennigan) and Kathryn Renée Thomas (Mrs. Adler). Along with The Katydids, showrunner Ian Roberts(Upright Citizens Brigade founding member) executive produces the series.