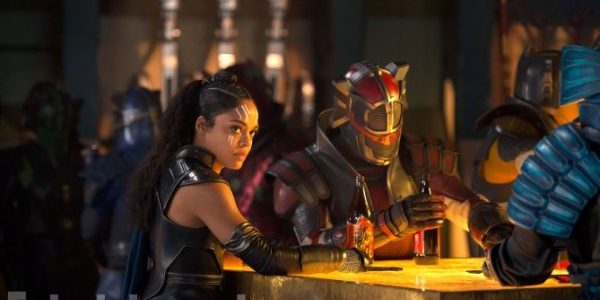 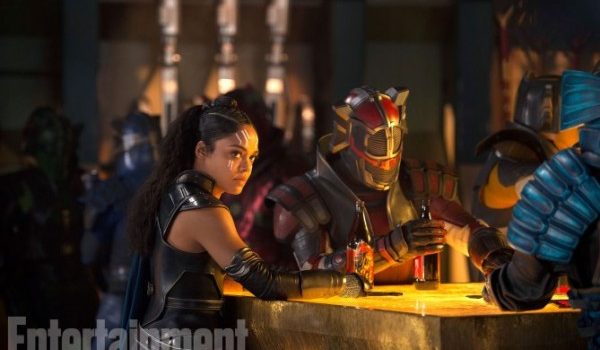 Following from Entertainment Weekly’s exclusive photo reveal, more details have emerged regarding the plot of Marvel Studios’ sequel – Thor: Ragnarok. And longstanding rumours about where we find the God of Thunder and Bruce Banner after Age Of Ultron, may possibly have some truth to them…

When we last saw Thor, he was flying off to figure out who was manipulating the Avengers at the end of Age of Ultron. Eventually, he hears rumblings of trouble in Asgard: His evil brother, Loki (Tom Hiddleston), has been impersonating their missing father, Odin (Anthony Hopkins). Loki’s rather lax governing leads to the reemergence of an imprisoned Hela (Cate Blanchett). Thor’s initial encounter with Hela gets him blasted to Sakaar, a barbaric planet ruled by the charming but nefarious Grandmaster (Jeff Goldblum). Valkyrie (Tessa Thompson), a tough, hard-drinking warrior hiding out on Sakaar brings the god to the Grandmaster. “Thor is a bit of a fanboy for the Valkyrie, the elite women warriors,” Hemsworth says. Thor is then forced into becoming a gladiator, which leads to his haircut and the loss of his trusty hammer, Mjolnir.

Sakaar will be familiar to both Thor and Incredible Hulk comic fans – as this is the world where Hulk crash lands after being thrust into the far reaches of space during the popular Planet Hulk comic run. And it looks almost a certainty that when we arrive on Sakaar during Ragnarok – we will be seeing Banner in full Gladiator mode. Being noted as a celebrated warrior by the inhabitants of the world. Incidentally, the Sakaaran race are already a part of the MCU – appearing in 2014’s Guardians Of The Galaxy.

According to actor Mark Ruffalo –  “He’s much more of a character than the green rage machine you’ve seen in the Avengers movies. He’s got a swagger. He’s like a god.”

Director Taika Waititi’s more comedic approach to the series has been met with some criticism from social media users – many expressing their anxieties of taking Thor and Hulk on a buddy comedy/road trip movie route. But the Kiwi native has praised actor Chris Hemsworth’s previous work in films like Ghostbusters (2016) and Vacation, and used these performances as inspiration for Thor’s 3rd solo outing. Fans of the Asgardian will no doubt be waiting with baited breath to see how the director will blend his unique brand of humour, with the grandiosity and adventure that we’ve seen before in the series.