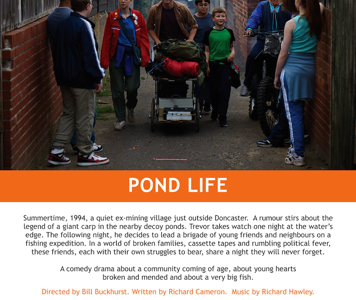 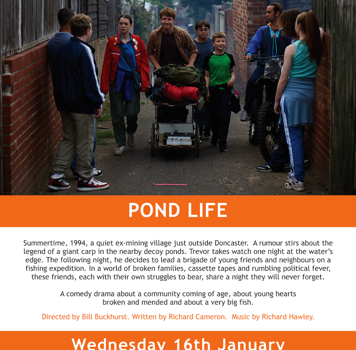 POND LIFE is a comedy drama about a community coming of age, about young hearts broken and mended, and about a very big fish. ...

POND LIFE is a comedy drama about a community coming of age, about young hearts broken and mended, and about a very big fish.  Featuring a cast of upcoming young actors, led by the talented Esme Creed Miles (Dark River), Tom Varey (Game of Thrones) and Angus Imrie (The Kid Who Would Be King), and supported by established names including Siobhan Finneran (Apostasy), Sian Brooke (Sherlock) and Julie Hesmondhalgh (Broadchurch), POND LIFE will be released in UK cinemas on 26 April 2019. 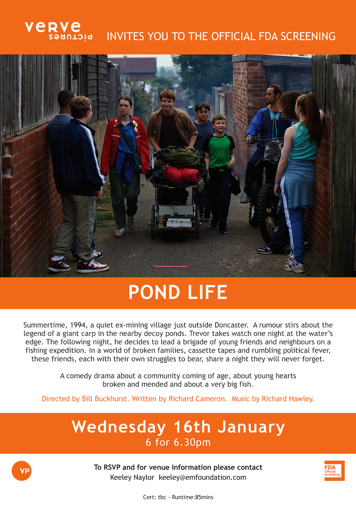 Written by acclaimed playwright Richard Cameron (‘Can’t Stand Up For Falling Down’), and directed by award winning theatre director Bill Buckhurst(‘Sweeney Todd’) with a cracking score by Richard Hawley (Funny Cow), POND LIFE sits in the great British tradition of films about post-industrial communities including Billy Elliot, Brassed Off and The Full Monty.  Marking Bill Buckhurst’s debut feature film as director, POND LIFE is the second film to be released by Verve Pictures through their First Feature Distribution Support Scheme supported by funding from the BFI.

Summertime, 1994, a quiet ex-mining village just outside Doncaster. A rumour stirs about the legend of a giant carp in the nearby decoy ponds. Trevor takes watch one night at the water’s edge. The following night, he decides to lead a brigade of young friends and neighbours on a fishing expedition. In a world of broken families, cassette tapes and rumbling political fever, these friends, each with their own struggles to bear, share a night they will never forget.

POND LIFE was originally written by Richard Cameron as a stage play performed at The Bush Theatre under artistic director Dominic Dromgoole. The idea for the story came from a summer when Richard ran an activities summer school for special needs teenagers, and to relax he would go back to the pond near where he grew up in Doncaster, next to an ex-pit village.  Twenty years later Richard rewrote the play as the film script POND LIFE with Dominic Dromgoole onboard as producer for Open Palm Films.

Richard Cameron’s  work includes the television play ‘Stone, Scissors, Paper’ for which he received the inaugural Dennis Potter Award in 1997, and many critically acclaimed stage plays including ‘Can’t Stand Up For Falling Down’, which won a Fringe First and The Independent Theatre Award, and ‘The Glee Club’ for The Bush Theatre, which transferred to the West End before a national tour and was adapted as a radio play for Radio 4. He has also won The Sunday Times Playwriting Award three times and was the Thames Television Writer in Residence at The West Yorkshire Playhouse.

When director Bill Buckhurst first read Richard’s script, he was “blown away by the authenticity of the young voices in his story” and came on board to direct his debut feature film.  Bill trained as an actor and has appeared in films including Skyfall and The Foreigner, but after directing work on the Fringe, he realised his passion lay on the other side of the process.  His production of ‘Sweeney Todd’, which began in a Pie and Mash shop in Tooting, transferred to the West End, and played for almost two years off-Broadway. He recently directed ‘Sweet Charity’ at the Nottingham Playhouse, ‘Much Ado About Nothing’ at the Grosvenor Park Open Air Theatre and ‘The Selfish Giant’ at the Vaudeville theatre.  Some of his previous stage credits include a stage version of Derek Walcott’s ‘Omeros’ at the Sam Wanamaker Playhouse. Further works directed at Shakespeare’s Globe include: ‘King Lear’, ‘Hamlet’, ‘The Merchant of Venice’, ‘A Midsummer Night’s Dream’, ‘Macbeth’ and ‘Romeo and Juliet’.

Actress Esme Creed-Miles who plays Pogo in POND LIFE, is best known for her role in Clio Barnard’s Dark River alongside Ruth Wilson and Sean Bean. She first appeared on screen as a child in Harmony Korine’s Mister Lonely playing the role of Shirley Temple. Esme also took the part of Sister Stevie in Open Palm Films’ Undercliffe. She will play the title role of Hanna in the upcoming Amazon Studios original TV series. Esme was recently selected by Screen International as a Star of Tomorrow 2018.

Actor Tom Varey plays Trevor in POND LIFE.  Before he graduated from RADA Tom landed the role of ‘Bert Middleton’ in BBC period drama ‘The Village’. Since then he has been a consistent presence on British screens and is best known for his role of PC Stuart O’Connell in Channel 4 Comedy ‘No Offence’ and as Will Simpson in Channel 4 drama ‘Ackley Bridge’. In addition to these he has also had roles on HBO’s ‘Game Of Thrones’ and the TV mini-series ‘Dark Angel’.

Well known for playing the character of Josh Archer in the BBC Radio 4 drama serial ‘The Archers’, Angus Imrie who plays the character of Malcolm in POND LIFE, can soon be seen in Joe Cornish’s upcoming film The Kid Who Would be King as young Merlin.  Angus won Spotlight’s Most Promising Actor Award at The Sunday Times National Student Drama Festival in 2014.