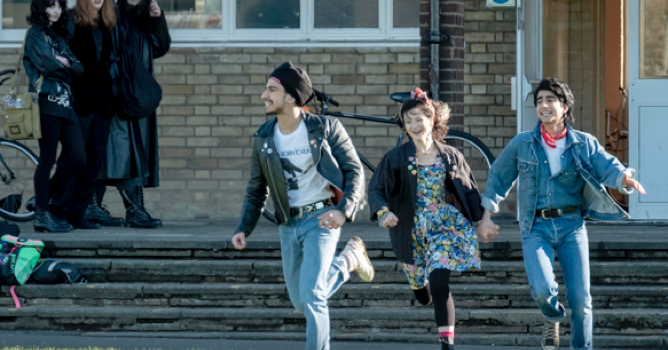 Principal Photography Begins On Gurinder Chadha’s Blinded By The Light

Ground-breaking filmmaker Gurinder Chadha has begun principal photography on her heart-warming new comedy drama, Blinded By The Light. The film is a hybrid musical...

Ground-breaking filmmaker Gurinder Chadha has begun principal photography on her heart-warming new comedy drama, Blinded By The Light. The film is a hybrid musical that is firmly rooted in the great British tradition of quirky comedies, but with a dash of youthful exuberance inspired by John Hughes’ films from the 1980s.

Blinded By The Light, developed from Gurinder Chadha and British Journalist Sarfraz Manzoor’s shared passion for Bruce Springsteen and based on Manzoor’s celebrated rite of passage memoir Greetings from Bury Park, chronicles his experiences as a British Muslim boy growing up in 1980’s Luton and the impact Springsteen’s lyrics had upon him.

Chadha and Manzoor met Springsteen at the London Premier of his film The Promise in 2010 and discovered he had not only read but admired the book.

“I quickly pitched him the film we wanted to make from the book on the Red carpet and to our excitement Bruce nodded and said, “Sounds good – talk to Jon”. We then spent several years developing a script we knew had to impress Springsteen and managers Jon Landau and Barbara Carr or there would be no film without his music and blessings.”

“Growing up in eighties Luton as the working class son of Pakistani Muslim immigrants my world felt very small. In the music of Bruce Springsteen I found both hope and wisdom on how I could transcend my circumstances and make my dreams to be a writer come true. The fact that I was so affected by Springsteen’s songs shows just how powerfully music can transcend race, religion, nationality and class. Blinded By The Light is also a tribute to my late father whom I often fought in my teenage years not realising his generation also had dreams they were not able to follow.”

They embarked on the feature film adaptation alongside Chadha’s longtime writing partner Paul Mayeda Berges. Presenting a personal story that resonates on a global stage, Blinded By The Light is reminiscent of Chadha’s much-loved and acclaimed films that have taken characters new to the screen and transported them to people’s homes and hearts internationally.

“At a time of such political and social instability in the world, this film provides us with a vital reminder of our shared humanity and the transformative power of music on both a personal and global scale.”

Producer Jane Barclay comments “We’ve had an overwhelming response to the power of this story whose emotional and social themes are so relevant in today’s world.”

The film, due for completion in early 2019, is currently shooting on location in the UK.

Blinded By The Light is an Ingenious Media and Levantine Films presentation of a Bend It Films production and was developed with support from the BFI. eOne were quick to come on board after being moved by the script, acquiring distribution rights in the UK and Australia.

Cornerstone Films is handling international sales rights on the film and will introduce it to the buyers at the upcoming Cannes International Film Festival.

Levantine Films and Peter Touche of Ingenious Media are producing the film alongside Gurinder Chadha and Jane Barclay. Hannah Leader, Paul Mayeda Berges and Tracy Nurse serve as executive producers on the project, and Alice Dawson is the co-producer.