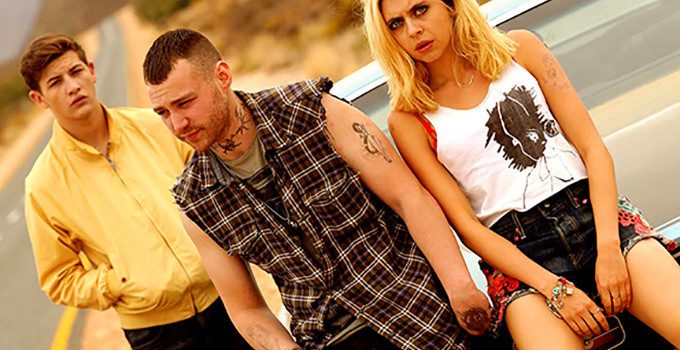 Often there is that one film which slips through the net. It misses radars, and succumbs to a life lingering in the shadow of its year. Detour – the forthcoming film from writer-director Christopher Smith – looks as though it could be one of those titles, but then again, with a trailer this slick, perhaps a few ears will prick up.

Starring Tye Sheridan (Mud, X-Men Apocalypse) alongside the brilliant duo of Emory Cohen (Brooklyn) and Bel Powley (The Diary of a Teenage Girl), this first trailer for the neo-noir movie – which will receive a duel theatrical and VOD release – echoes the guts and gusto of a Nicolas Winding Refn entry; packed with vibrant colours, lashings of violence, and alarming sound design. Give it a spin here and see what you think.

Harper (Tye Sheridan), a seemingly naive law student, obsesses over the idea that his shifty stepfather was involved in the devastating car crash that left his mother hospitalized and comatose. He drowns his suspicions in whiskey until he finds himself suddenly engrossed in conversation with volatile grifter Johnny (Emory Cohen) and his stripper companion, Cherry (Bel Powley). As daylight breaks and the haziness of promises made becomes clearer, how will Harper handle the repercussions (not to mention the violent duo—on his doorstep)? Employing a split-narrative structure to tell this tale of deception and murder, Christopher Smith takes his audience on a thrill ride full of hairpin turns, where it’s never quite clear what or who can be trusted.