Season 8 is Coming: Game of Thrones Timeline charts notable deaths, sex scenes and battles from the series so far

– A new interactive timeline charts the notable events from every Game of Thrones episode so far, including deaths, marriages, arrests, allegiances and sex scenes. –...

– A new interactive timeline charts the notable events from every Game of Thrones episode so far, including deaths, marriages, arrests, allegiances and sex scenes.

– The comprehensive guide also collates statistics across 10 categories to reveal the deadliest, most tactical and most battle-ready characters in Westeros and beyond.

– Daenerys Targaryen has made the most political allegiances in her quest for the Iron Throne with 11, while Cersei Lannister has had 7 sexual encounters.

– The Lannisters are the deadliest house with a total of 7 significant kills, while House Stark is involved in a staggering 8 major battles throughout the franchise.

Have you ever found yourself struggling to remember what happened in previous episodes of your favourite TV show, or wanted to start watching a popular series but felt too far behind to start?
The Game of Thrones Timeline maps out key events from every episode of the series so far, including major character deaths, notable marriages, imprisonments and allegiances formed, to help fans get up-to-date during the final season.
The extensive guide analyses each episode in detail to determine the total number of notable characters killed, deals formed, and battles waged throughout the franchise. It also lists the deadliest, most tactical and most promoted characters, and includes trivia, fun facts and synopses of each season.
The detailed breakdown reveals that Margaery Tyrell has had the highest number of marriages, while Tyrion Lannister has been granted the most promotions. However, both he and Jaime Lannister are the most often imprisoned characters – despite belonging to the deadliest House.
The most explicit episode is Winter is Coming, with a staggering three notable sex scenes, while The Rains of Castamere features the most notable deaths and battles. Unbowed, Unbent, Unbroken features the most imprisonments and arrests, while The House of Black and White claims the most promotions.
You may know that Arya Stark is on a mission to cross names from her Kill List, but did you know that she’s already more than halfway done? Or that the notorious Night King has only appeared in nine episodes overall?
There have been 75 major character introductions, 27 significant deaths, 56 allegiances, 36 sex scenes and 33 arrests during the series so far, along with six species of creature and 59 different locations visited. Only two episodes in the series don’t feature any deaths.
Other fascinating facts from the franchise include the origin of the Iron Throne, the meaning of the show’s opening credits and how Daenerys’s dragons were made.
Categories and datasets compared include: 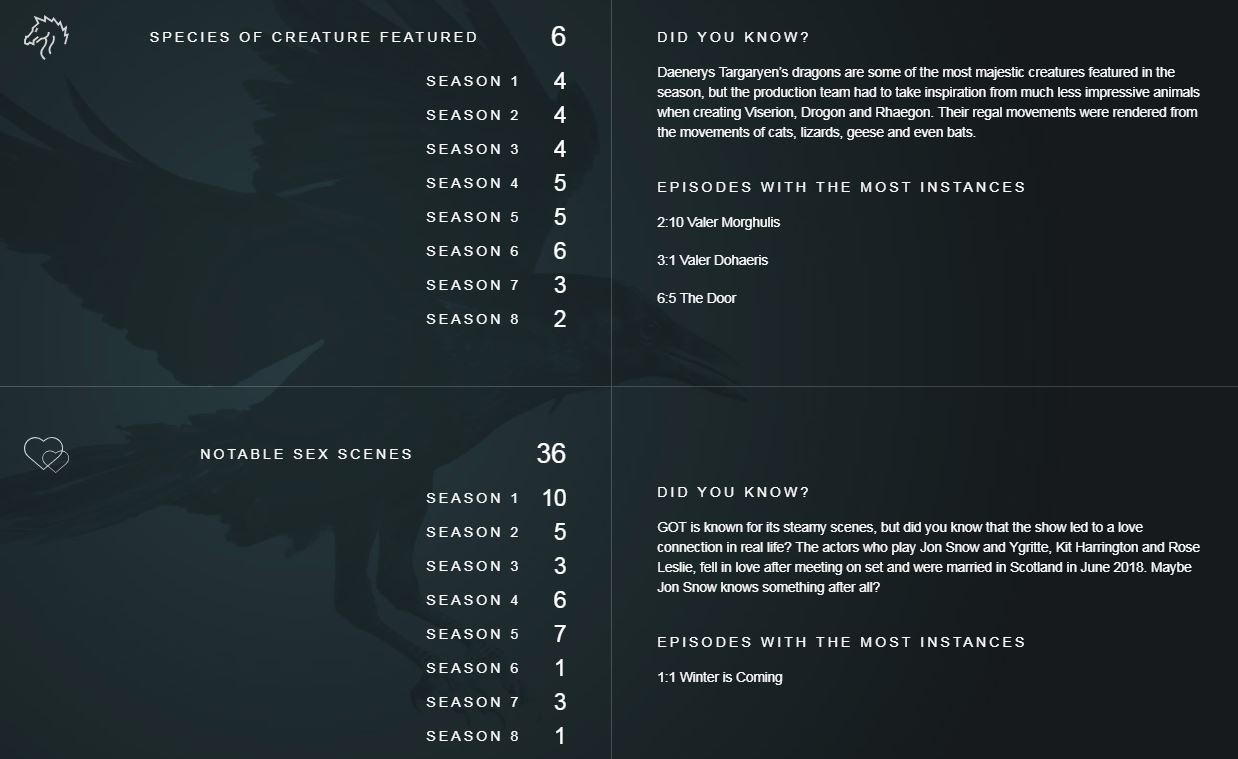 To catch up with the Land of Ice and Fire and see how your favourite character has fared throughout the franchise so far, Game of Thrones Timeline has all the information you need.
The interactive timeline is updated following each episode of the final season, which premiered on 14 April.
To view the Game of Thrones Timeline, please visit: https://www.game-of-thrones-timeline.com/
Post Views: 0
Game of Thrones35
Add a comment