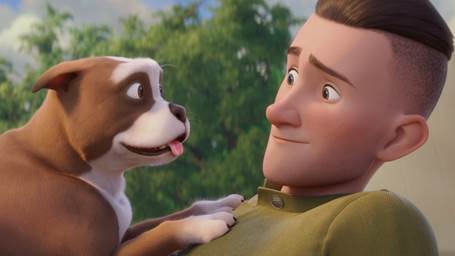 “Sgt Stubby: An Unlikely Hero” to be released in cinemas this Friday, 10 August 2018.

Directed by Richard Lanni, “Sgt Stubby: An Unlikely Hero” is a true story of a stray dog who joins his new master on the battlefields of the First World War. For his valorous actions, Sgt. Stubby is still recognised as the most decorated dog in American history.

With the “War to End All Wars” looming, the life of Army “doughboy” Robert Conroy (Logan Lerman, Fury, Perks of Being a Wallflower, Percy Jackson & The Olympians) is forever changed when the little stray dog with a stubby tail wanders into his training camp, where Conroy gives his new friend a meal, a name, a family and a chance to embark on an adventure that would define a century.

A genuine, four-legged American hero, Sgt. Stubby soon finds himself in the trenches of France, embarking on a historic adventure by his beloved Soldier’s side, to show the world the true meaning of dedication, loyalty and bravery in this thrilling “tail” of adventure for the entire family.

Narrated by Robert’s sister Margaret (Helena Bonham Carter, Ocean’s 8, the Harry Potter films, The King’s Speech, Sweeney Todd), Stubby and his new best friend quickly find themselves in the trenches of France. Befriended by French poilu Soldier Gaston Baptiste (Gérard Depardieu, Life of Pi, Cyrano De Bergerac, The Man in the Iron Mask, Green Card), Stubby accompanies the duo along their epic journey through harsh conditions and incredible acts of courage. As combat rages around them, Stubby keeps the trenches vermin-free, alerts his comrades-in-arms of incoming attacks, rescues the wounded in No Man’s Land and even catches a German spy! Back home, his exploits make the front pages of newspapers across the country and steal the heart of the nation.