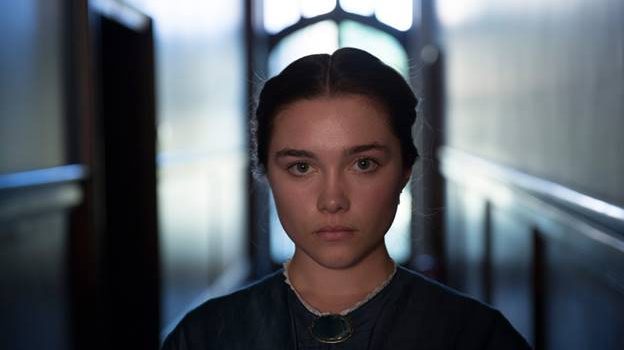 Described as ‘one of the most radical films of the year’, a striking new trailer for the upcoming Lady Macbeth has arrived and it...

Described as ‘one of the most radical films of the year’, a striking new trailer for the upcoming Lady Macbeth has arrived and it certainly packs a punch in its presentation of what we can expect from the release.

Focusing on lead Florence Pugh as she sits in a moment of thought, the trailer is brilliantly ramped up with sound bites of the terrors that she has been subjected to and quick cuts of some of the darker moments we can expect from her life situation. It’s a slow build trailer that really delivers plenty of bite in its sharp-edged editing and promise of a dark and affecting drama.

Promising to deliver one hell of a performance from leading lady Pugh, you can watch the trailer below.

Rural England, 1865. Katherine (Florence Pugh) is stifled by her loveless marriage to a bitter man twice her age, and his cold, unforgiving family. When she embarks on a passionate affair with a young worker on her husband’s estate, a force is unleashed inside her so powerful that she will stop at nothing to get what she wants.

The film is loosely based on a nineteenth century novella called Lady Macbeth of Mtsensk District by Nikolai Leskov and was later adapted as an Opera. Lady Macbeth is a tragic portrait of a beautiful, determined and merciless young woman seizing her independence in a world dominated by men.

Lady Macbeth is released in the UK on 28th April.