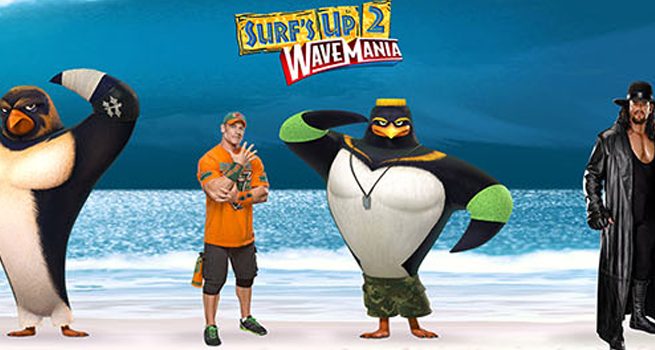 With last night’s WWE Elimination Chamber creating waves, with two title changes taking place, it seems rather apt that today we have news of...

With last night’s WWE Elimination Chamber creating waves, with two title changes taking place, it seems rather apt that today we have news of the home entertainment release of Surf’s Up 2: Wavemania, featuring some of the wrestlers we’ve known and loved through the years lending their vocal talents to the sequel.

A film presented by Sony Pictures Entertainment and WWE Studios, Surf’s Up 2 features WWE superstars Triple H, John Cena, The Undertaker, Paige and Mr. McMahon, as well as the likes of Jon Heder, Jeremy Shada and Diedrich Bader. The film is set for DVD release on 19th March and you can check out the full synopsis for the film and further details of the DVD below.

Cody Maverick, hungry for a new challenge, convinces an infamous big wave riding crew known as The Hang 5, voiced by WWE Superstars John Cena®, Undertaker®, Triple H®, Paige™ and Mr. McMahon® to let him join them on their journey to a mysterious surf spot known as The Trenches, where legend has it, they’ll find the biggest waves in the world. Cody soon discovers that the life he left behind might be more heroic than what any death-defying wave has to offer.

DVD and Digital Bonus Materials Include: