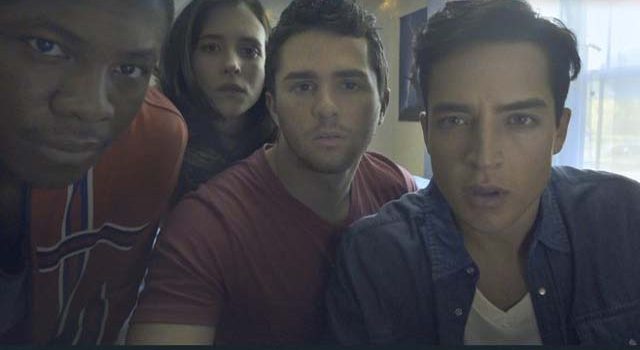 We live in a world obsessed with social media and with a large majority of the population fixated on some iteration of a screen...

We live in a world obsessed with social media and with a large majority of the population fixated on some iteration of a screen in front of them. You only have to walk around the street to see people with earphones in, staring at screens and even capturing their everyday lives via cameras to post on YouTube channels on a regular basis. With that in mind, the basis for new horror-thriller The KAOS Brief is born, with its core character presenting the found-footage movie from an entirely new perspective than has been seen before in the genre.

JP Mandarino’s The KAOS Brief opens with a hacktivist message that is very much a warning to those about to watch. Brilliantly executed as a truly terrifying piece of internet warfare, the message is a brilliant introduction to the movie’s core footage, all filmed on various cameras ranging from handheld to CCTV and even via a drone.

The focal points of such footage, mysteriously introduced by a masked figure, are online blogger Skylar (Drew Lipson), his partner Corey (Marco DelVecchio), Skylar’s sister Dakota (Charlie Morgan) and her boyfriend Then (Akanimo Eye). Skylar is a rather vain and self-obsesses blogger, keen to let the world know what he’s up to on a daily basis as much as he is in keeping his hair in good shape. His channel, named Skylar TV, is growing in fans and its owner feels the need to take things on the road with some footage of a camping trip.

As the quartet plan a leisurely trip of camping in the woods, Skylar’s camera captures a moment out of the ordinary with some strange lights appearing in the sky and instantly bringing about the notion of extra-terrestrial life. Initially dismissed as the government messing with them, Skylar and the rest of the group slowly begin to feel as though it may well have been something much more – especially when Skylar begins to receive warning messages to delete his footage immediately. When figures in black suits begin to visit his home, Skylar begins to question what is really going on and if there really is something out there after all…

As with many found-footage movies in this day and age, originality is often the crux which can see so many films stumble at the earliest hurdles, with audiences having experienced so many of these films by now that we feel almost fatigued by them. Thankfully, The KAOS Brief at least looks to bring some air of refreshment to the fray, instead opting for a variety of methods to get across its specific style and really taking today’s technological society and putting it to good use. The fact that the film focuses on a YouTuber instantly forges it as something rather diverse from the usual found-footage tropes and for the most part it actually works rather well, whipping from handheld documenting to drone cameras all by way of security cameras in and around a house. It all feels quite well poised and naturalistic in a sense, with leading star Drew Lipson revelling in his role as the charismatic and self-indulging Skylar.

Along with Skylar, the other core characters in the film are actually quite far from your typical horror movie characters, instead using a bit of knowledge and cleverness in the scenarios they find themselves within, something that is often missing in such movies. Their actions are often justified and as events unfold we can genuinely feel like they are in a dangerous and unnerving scenario. Such is the chemistry between the quartet that it helps to drive the events impressively and keep the audience engaged.

Where The KAOS Brief does often falter though is in its pacing. For a film that is rather short it does tend to drag its feet at stages, opening as a slow burn and never quite hitting a favourable pace that would give it that cutting edge. With this issue it means that some of the moments of tension never really hit the mark and come the conclusion of the film many will find the experience a little underwhelming. That being said, this is a film that isn’t a film afraid of going against the grain and is certainly worth checking out.