The Most Iconic Movie Cars of All Time

With Steven Spielberg’s epic return to Sci-Fi, Fulton Leasing take a look at Ready Player One’s homage to some of the most iconic movie...

With Steven Spielberg’s epic return to Sci-Fi, Fulton Leasing take a look at Ready Player One’s homage to some of the most iconic movie cars of all time.

Fast-forward to 2045. The world is but a shadow of its former self. Teetering on the edge of collapse due to cataclysmic climate change and a global shortage of fossil fuels, everything which we now fear has come to pass. It’s the ultimate dystopian future. The people, however, have found liberation and salvation in the OASIS, a virtual reality universe created by James Halliday.

When Halliday dies, he leaves his fortune to the first person to discover an Easter egg which he has buried deep inside the OASIS, kick-starting a competition that captivates the entire world.

When a down-and-out young hero named Wade Watts decides to participate in the contest, he finds himself on a reality defying treasure hunt where drag races through space and zero gravity dance battles are the norm.

In Ernest Clines best-selling original novel, pop culture shout-outs are rife (mostly from the 80s), and if the trailer is anything to go by, the movie will be too. Let’s take a look at some of the car Easter eggs we spotted in the trailer and what earned them their iconic pop culture status: 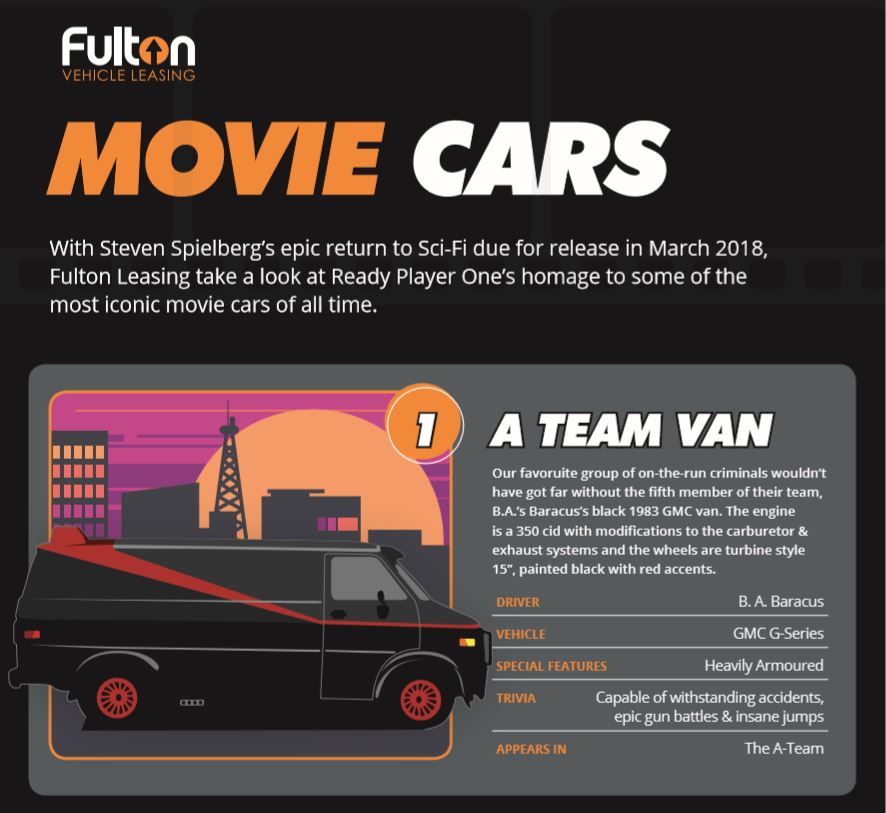 Our favoruite group of on-the-run criminals wouldn’t have got far without the fifth member of their team, B.A.’s Baracus’s black 1983 GMC van. After being framed for a crime they didn’t commit, the loveable Vietnam vets and their faithful van became mercenaries for hire (only for good of course), pitting themselves against all types of crooks, criminals and all-round unsavoury characters.

The van, which belonged to Sergeant Bosco, was a 1983 G-series customised by the props department at Universal Studios. The engine is a 350 cid with modifications to the carburetor and exhaust systems and the wheels are turbine style 15″, painted black with red accents. The interior was kitted out with bespoke white bucket seats, shag carpet and a custom gun case in the back.

Considering it was a relatively normal domestic vehicle, it recovered remarkably well from being driven off cliffs, jumped through fire and unceremoniously destroyed in a plethora of different ways.

Either Bosco truly was a master mechanic, or maybe they just got a really good deal on car insurance. 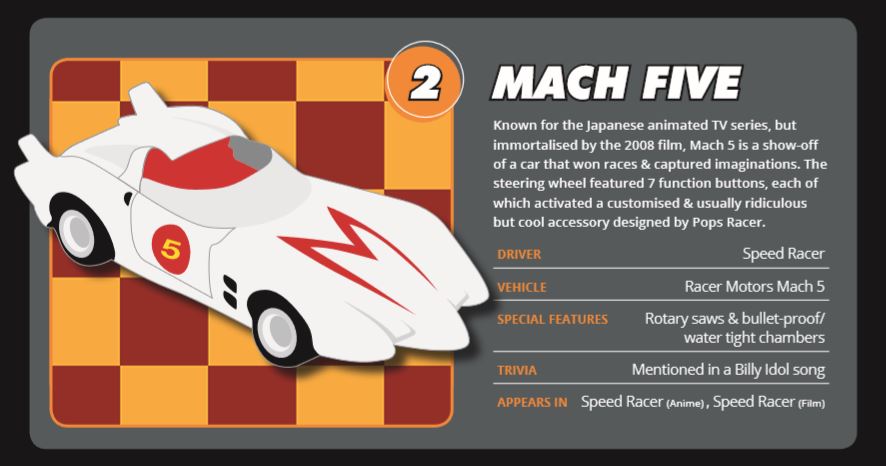 Historically known for the Japanese animated TV series, but immortalised by the 2008 film, Mach 5 truly is a show-off of a car that won races and captured imaginations. The steering wheel featured seven function buttons, each of which activated a customised and usually ridiculous but cool accessory designed by Pops Racer.

From rotary saws protruding from the front to hack away at obstacles, through to a powerful deflector which seals the cockpit into an air-conditioned, bullet-proof and water-tight chamber, the Mach 5 has an arsenal of gadgets to rival even the Batmobile.

Design-wise, Mach 5 boasted a distinctive pointed-toe grill and iconic white, yellow and red colour scheme. Those who have some spare cash lying around and are looking for the Mach 5 real-life counterpart, look no further than the 1968 Ferrari 250 P5, Aston Martin DBR1 or the Ferrari 250 Testa Rossa. 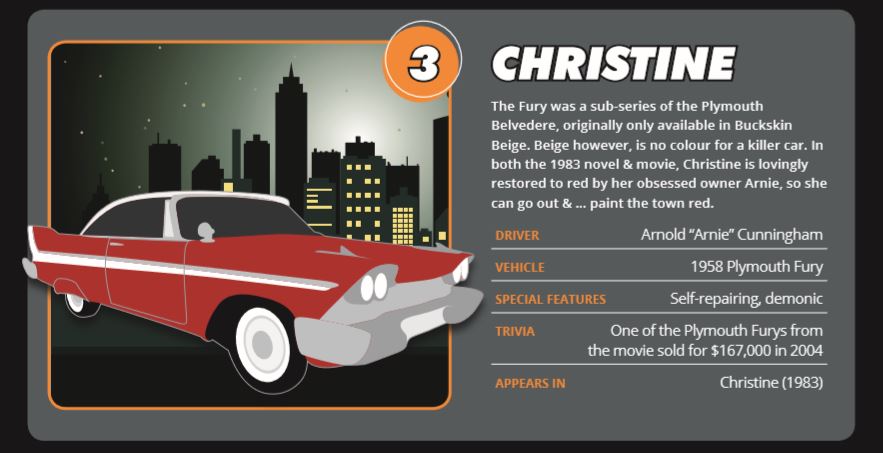 The Fury was a sub-series of the Plymouth Belvedere, in production from 1956 through 1958, originally only available in Sandstone White and Buckskin Beige. Beige however, is no colour for a demonic, killer car. In both the 1983 novel, and the 1983 movie, Christine is lovingly restored to red by her obsessed owner Arnie, so she can go out and… paint the town red.

Stephen King fans take note. Christine, or a 1958 Plymouth Fury, also makes an appearance in a range of other king novels. In the novel ‘It’, Christine is driven around by Henry Bowers’ whole lotta crazy dad, while in post-apocalyptic horror The Stand, Stu Redman and Tom Cullen find a model of the abandoned car.

If you’re looking to bring back the fury, this model is relatively rare now, though they do occasionally pop up at specialist auctions. Murderous tendencies don’t come as standard. 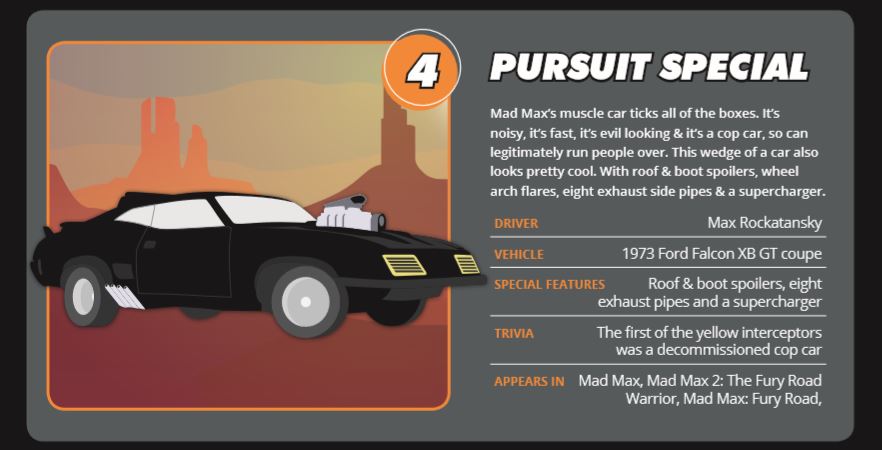 Mad Max’s muscle car ticks all of the boxes. It’s noisy, it’s fast, it’s evil looking and it’s a cop car, so can legitimately run people over. This wedge of a car also looks pretty cool. With roof and boot spoilers, wheel arch flares, eight exhaust side pipes and a supercharger, just imagine the V8 storming through barren wasteland hunting down criminals. Awesome.

In 1976 when film makers Bryon Kennedy and George Miller began pre-production on Mad Max, the budget was just $350,000 for the entire film, with a measly $20,000 for props and vehicles, but the climax of the film revolving around an epic car chase.

In the end, three Australian cars were purchased for less than the $20,000 budget. Two ex-Victorian police Ford Falcon V8 XB sedans and a white 1973 Ford Falcon XB GT coupe. The sedans went on to become Big Booper and Max’s yellow Interceptor, while the GT was reborn as the Pursuit Special. 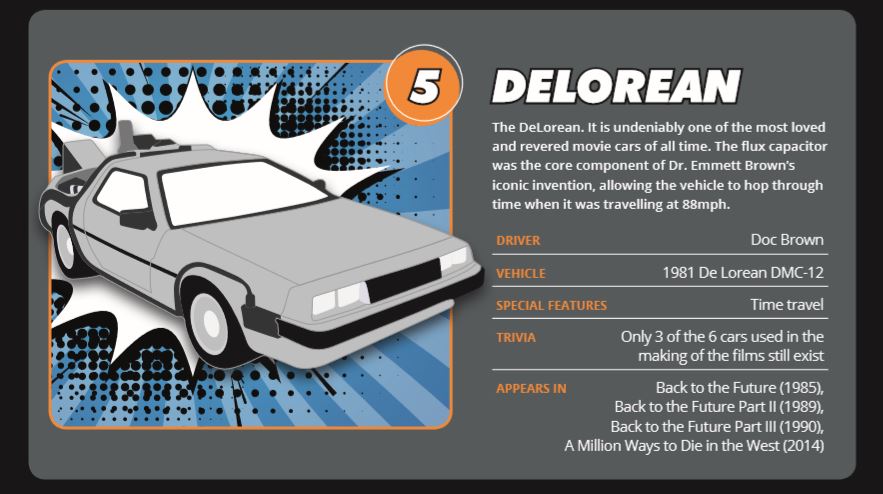 The DeLorean. It is undeniably one of the most loved and revered movie cars of all time. The real-life DeLorean, that being, the one that can’t travel through time, was originally built in Dunmurry, south-west Belfast, with the first car rolling off the production line in 1981.

Of the 9,000 DeLoreans that were originally built, it is estimated that somewhere between 6000 and 7000 remain – some in private ownership while others are scattered among motor museums.

The DMC-12 was so named because it was originally priced at $12,000. However, by the time it came to market, the suggested retail priced had doubled to $25,000.

A total of six DeLorean cars were used for the making of the Back to the Future movies. One built entirely of fiberglass for scenes in which the car was shown to fly. Only three of the cars are still in existence.

Inspired by his love for 80s movies, Ready Player One author Ernest Cline bought his very own DeLorean and modified it to pay homage to other influences such as Ghostbusters, Knight Rider and The Adventures of Buckaroo Banzai Across the 8th Dimension. It truly is the ultimate tribute to the era.

In 2012, Cline also famously decided to give away a DeLorean, complete with Flux Capacitor, as a promotional stunt for the paperback release of his novel.

What famous cars would you pay tribute to?