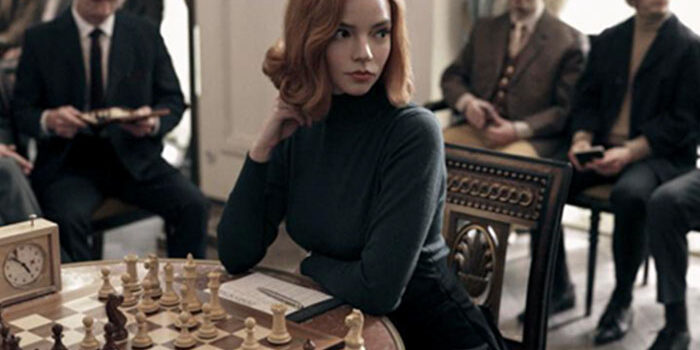 The Queen’s Gambit is a fiction series that chronicles the life of a young female chess prodigy, Beth Harmon, played by Anya Taylor-Joy. Intro...

The Queen’s Gambit is a fiction series that chronicles the life of a young female chess prodigy, Beth Harmon, played by Anya Taylor-Joy.

Orphaned at age 8, she has a unique character, Beth may be lonely, but she’s not shy, devoid of all fears. Her Achilles’ heel: the loss of her parents and heavy drug addiction when she was only a minor. In adulthood, she sinks into alcoholism, but Beth remains a potentially dangerous player against the dominant Soviets despite her difficulties. 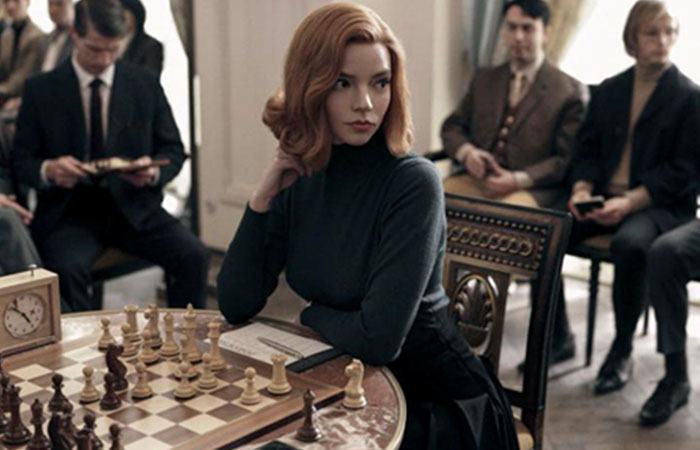 Based on the novel by Walter Tevis

The series, produced by Netflix, is based on the novel “The Queen’s Gambit” by Walter Tevis. When he first published the book in March 2003, this contemporary masterpiece especially appealed to the chessboard fans. This TV series, split into seven episodes, is a true homage to chess.

The beginning and flashbacks

The first episode of Lady’s Gambit reveals some key clues. Events unfold quickly, but there are frequent flashbacks throughout subsequent episodes. The role, so well-played by the heroine, is breathtaking. But don’t take our word for it; just watch the first episode of the series to find out.

The Netflix series, The Queen’s Gambit, has seven episodes of approximately 60 minutes. Directed by Scott Frank and Allan Scott, they released the seven-part saga on 23rd October 2020. The series now ranks in the top 10 in many countries.

The seven episodes are presented as a game of chess. First, there’s the opening, then the exchanges followed by the doubled pawns. Next, come the middle game and the fork. The intensity comes to a climax with the adjournment, and then the seventh act terminates with the end game.

Beth Harmon accidentally discovers the game of chess at barely eight years old. In the orphanage basement, the janitor, Mr. Sheibel, played by Bill Camp, secretly introduces her to chess. Mr. Sheibel, aware of the young girl’s genius, paves the way for her to the incredible world that the game of 64 squares and its 32 pieces can be.

This fiction story unfolds during the Cold War, and the seven episodes span over fifteen years. From childhood to adulthood, the player’s life goes from the darkest of times to the most glorious days. She brings down her opponents one after the other until the day she is confronted with her worst demons.

Beth Harmon considers herself invincible and ignores those who could bring her comfort and reassurance. Her obsession leads her into a fatal state of madness. Undoubtedly, her late adoption at the age of 15 plays an important role in finding a balance.

Beth’sOnce she reaches adulthood, Beth’s fragility remains lingering and could tip her over the edge at any time.

At the age of 15, still a resident at the orphanage, she gets adopted against all odds. Her “new” mother, Marielle Heller, ends up being the turning point in the chess player’s life, and the two women end up becoming best friends.

The strategic mind of the players

You can see how chess tournaments with the world’s greatest players play out throughout the prodigious series. It’s a great way to understand the scope of face to face matches that players experience at international meetings.

Overall, chess players have an analytical mind that goes beyond the normal brain. These extraordinarily gifted chess pro players know exactly how to master their 64 squares and pieces that unfold during clashes.

Chess players are different kinds of people. Numbers, puzzles and strategy games are part of their genetic codes. These fine strategists could easily be champions in poker tournaments at the biggest casinos in London or Las Vegas resorts.

You can imagine that if the Queen’s Gambit had turned to online Blackjack tables in the 2000s, she would have made a fortune winning every time. Even if the UK online casinos have the advantage, there’s a very good chance Beth would have found a loophole.

Despite her human reluctance, she manages to have great friendships and love encounters through a life entirely dedicated to chess. Beth Harmon’s character is a perfect example of boundless daring. We’ll keep a few moments secret, so you can enjoy them when you start watching this top-rated British series.

The star of the series took on her role in an exceptional way. Versatile and mysterious, endowed with maturity, she breaks taboos and celebrates anti-patriarchal movements. Since the release of the series, chess clubs have published complimentary reviews about the actress’s well-played role.

During the series’ promotion and press campaign, nothing seemed to appeal to audiences about The Queen’s Gambit. Film critics who had downgraded the series then now find themselves back-tracking! If only they’d delved into the incredible history of chess players to realize that they had a Gold nugget in front of them.

We salute the former champions of Russia who accepted a role in the series. The confirmed players of the 64 squares will only be able to note that there is a parallel between the “Lady’s Game” and Bobby Fischer, the most controversial US chess player in history (world champion in 1972 and 1975).