VERVE PICTURES ANNOUNCES 1ST JUNE ON DEMAND RELEASE FOR THE UNCERTAIN KINGDOM ‘A brilliant, subtle and multi-faceted group of timely shorts’ ★★★★ TIME OUT...

‘A brilliant, subtle and multi-faceted group of timely shorts’
★★★★
TIME OUT 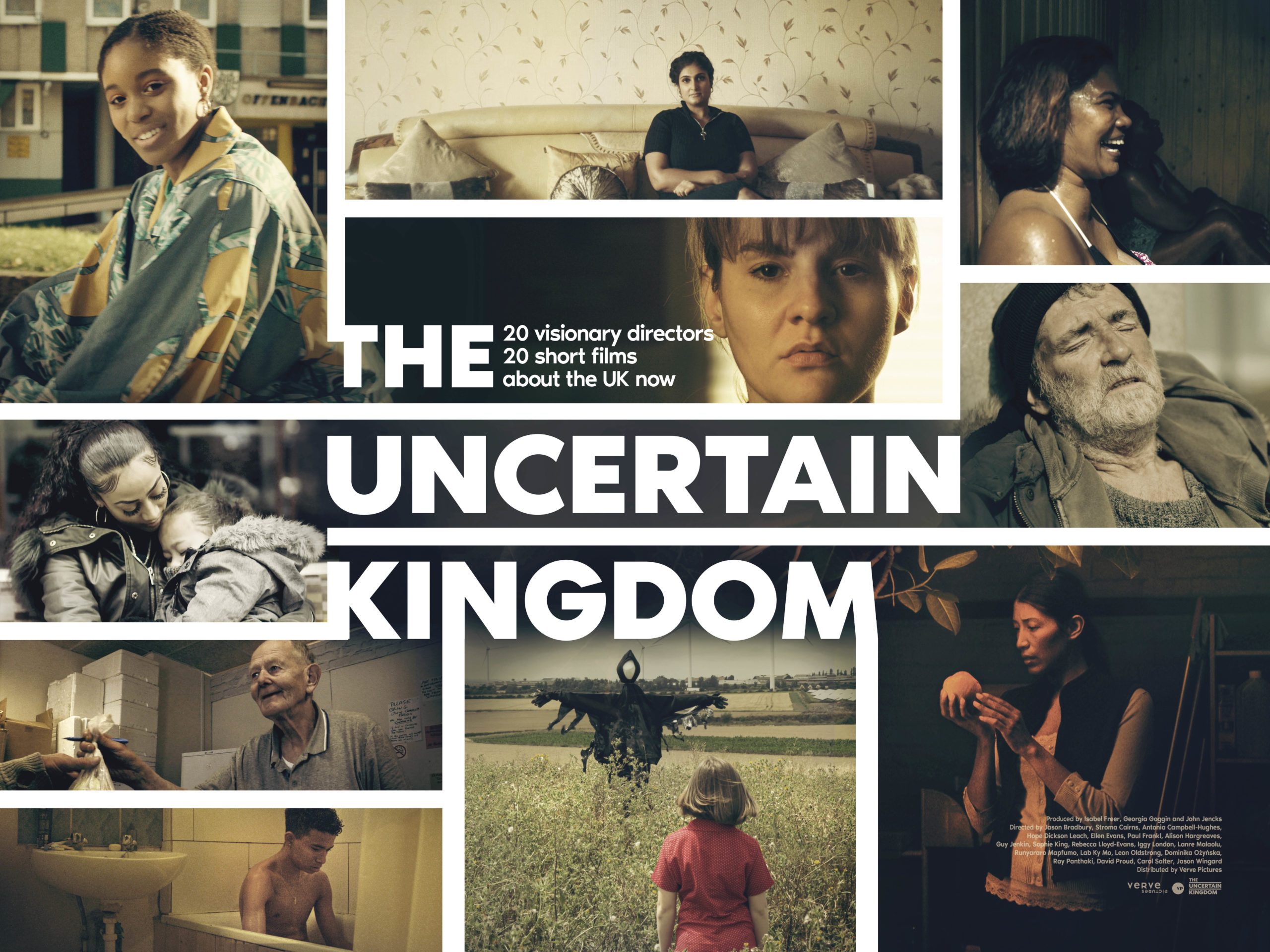 THE UPCOMING
The Uncertain Kingdom, the ground-breaking anthology of twenty short films from twenty directors will be released in the UK & Ireland on demand on 1st June.

The Uncertain Kingdom will be available on BFI Player programmed in two feature-length volumes, which will also be available on iTunes, GooglePlay, Amazon & Curzon Home Cinema. In addition, The British Council will release the films internationally allowing their partners to view the films simultaneous to the UK release.

Three of the titles in the anthology will be available for free on the BFI’s social channels from 18th May: Verisimilitude (dir. David Proud) tells the story of an unemployed disabled actress (Ruth Madeley) who gets a job advising an obnoxious up-and-coming star how to perform a disability for his latest role. Lanre Malaolu’s The Conversation explores the challenges black people face when communicating their racial experience to white partners through a dynamic fusion of dance and dialogue. Carol Salter’s Left Coast is a documentary filmed in the coastal towns of North West England that follows dedicated volunteers, handing out kindness and food to help those left behind.

The online release replaces the cinema release of The Uncertain Kingdom, which was originally scheduled for 3rd April before being cancelled due to Coronavirus. The films will still screen in local communities later this year, inspiring and supporting conversation about the subjects explored.

Climate change, migration, disability, homelessness and sexuality are just some of the subjects explored in The Uncertain Kingdom. The ground-breaking anthology of twenty short films from twenty directors offers a unique portrait of the nation today.

Original stories inspired by our uncertain reality, thought-provoking snapshots of the state of the nation and innovative cinematic visions of the United Kingdom. 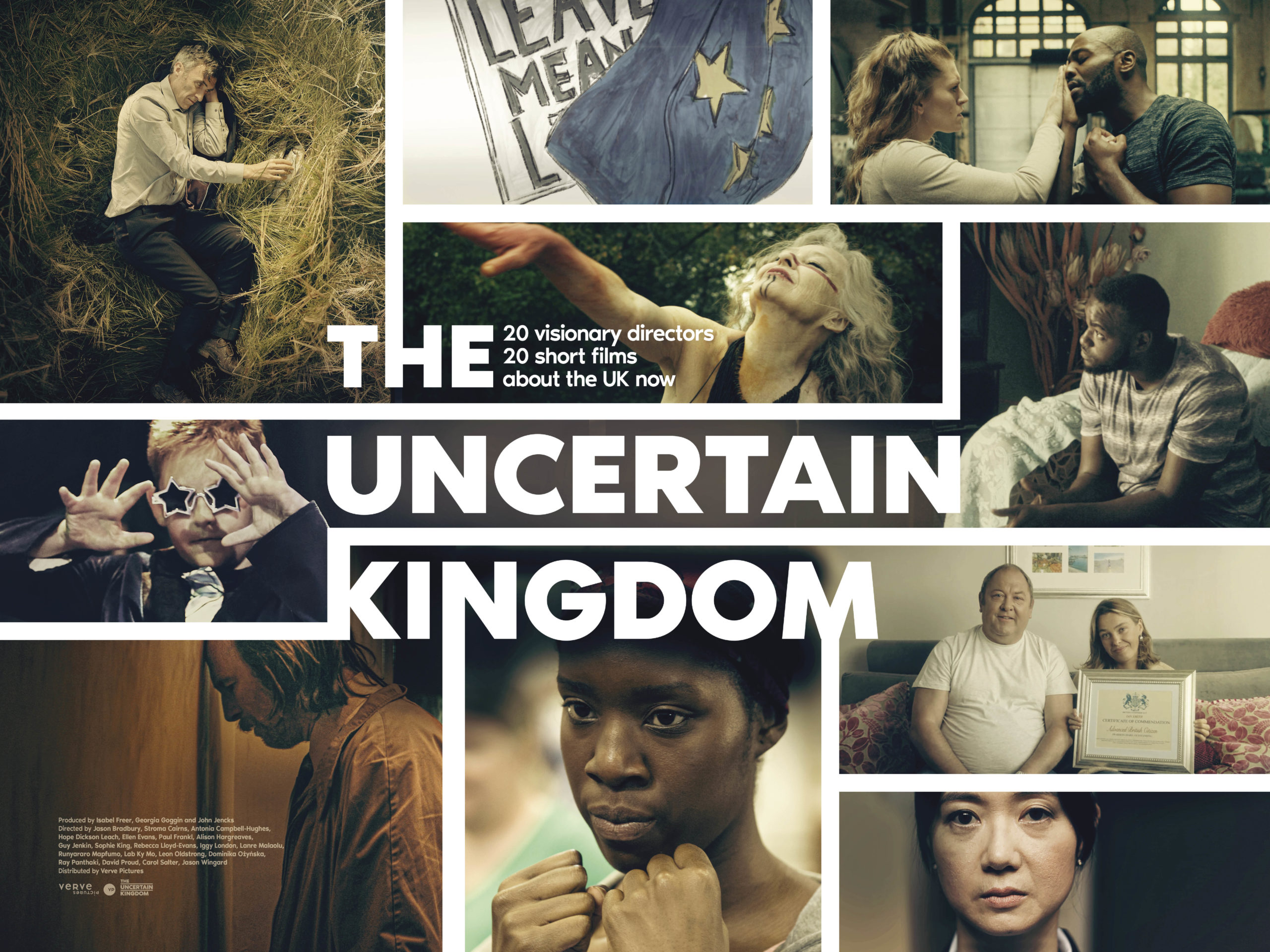 MOTHERLAND
Director: Ellen Evans (Life in Miniature – Sundance 2019)
Jamaican-born Brits who have been forcibly returned to their “home country” by the UK government describe their experiences.

ACRE FALL BETWEEN
Director: Antonia Campbell-Hughes (Q4L Quest for Love – Galway Film Fleadh 2019)
On a desolate Northern Ireland border, a man begins a desperate search for his family, knowing the future he feared is nigh.

CAMELOT
Director: Alison Hargreaves (producer of Inside Bitch at the Royal Court)
A reimagining of the Welsh legend of King Arthur, told by boys growing up in the Valleys with the quest of their own lives ahead of them.

SWAN
Director: Sophie King (Uneatable – Channel 4)
A marriage is tested when the patriotic husband’s success in a citizenship challenge means he will soon be turned into a swan.

STRONG IS BETTER THAN ANGRY
Director: Hope Dickson Leach (The Levelling)
A fists-bared, kickboxing, bleeding-nose look at who and what makes women angry right now – and what they do about it.

WE ARE NOT THE PROBLEM
Director: Dominika Ozynska (The Law of the Sea – Random Acts)
Seeing immigration from the perspective of a migrant, a Polish man describes what his countrymen people have contributed to the UK.

THE CONVERSATION
Director: Lanre Malaolu (Elephant in the Room – Roundhouse 2019)
Exploring the conversation black people face when communicating their racial experience to white partners through a dynamic fusion of dance and dialogue.

PAVEMENT
Director: Jason Wingard (BIFA winning director of In Another Life and Eaten by Lions)
A modern parable about a woman who sees a homeless man literally sinking into the pavement and her attempts to save him in an indifferent world.

SAUNA
Director: Stroma Cairns (If You Knew – Jury Special Commendation BFI LFF 2019)
In the heat of a community gym’s sauna, a disparate group of Londoners gather nightly to open up about community, connection and faith.

DEATH MEETS LISOLETTE
Director: Guy Jenkin (What We Did on Our Holiday)
After her neighbours become suddenly immortal, a young girl finds the Grim Reaper locked in a barn and amenable to making a deal for his freedom.

VERISIMILITUDE
Director: David Proud
An unemployed disabled actress gets a job advising an obnoxious up-and-coming star how to perform a disability for his latest role.

BORROWED FROM OUR CHILDREN
Director: Leon Oldstrong (That’s Not Ours – LSFF 2019)
A series of vignettes celebrating love, community, protest and joy to remind us that though our hope may diminish it is reborn in our children.

WHAT’S IN A NAME
Director: Runyararo Mapfumo (Dawn in the Dark – LFF 2019)
A handful of Brits explore the challenges they’ve encountered with their non-Western names and celebrate how their names express who they are.

THE LIFE TREE
Director: Paul Frankl (Roxanne – Flickers Rhode Island 2015)
The discovery of a healing tree brings hope to a Bolivian migrant whose son is close to death from plastic pollution.