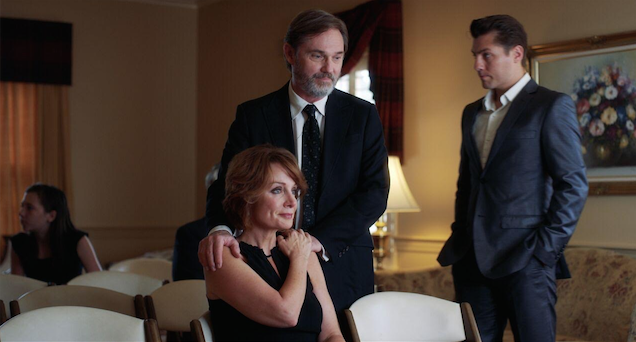 After the death of her father, a troubled woman returns home to confront the family who paid for her silence.

Lynn Mancinelli stars as the troubled Kira Flynn, a flawed but strong woman who is forced to confront her past so it can no longer define her.  Mancinelli won

Numerous awards for her recent films Bad Frank and Broken Side of Time. Richard Thomas rose to fame in the epic series The Waltons, and has since starred in more than fifty films. He stars as Richard Davenport, the man who has it all, and Emrhys Cooper stars as Kira’s equally troubled brother Lucas Flynn. Emrhys is known for his stellar work in Vanity, Person of Interest and Mamma Mia!  Kristin Carey is well known for her debut as Aunt Meg in Hall Pass and was recently cast opposite Miles Teller in the new Amazon Miniseries Too Old To Die Young.

Tony Germinario (Writer/Director/Producer) began his creative career in the music industry as the bassist and songwriter for the band Jel. He turned from writing songs to writing screenplays, and has been writing scripts for over a decade but finally stepped behind the camera to direct with the 2017 film Bad Frank starring Tom Sizemore, Boxing Champ Ray “Boom Boom” Mancini, and Brian O’Halloran (Clerks). The film experienced great success at domestic and international festivals, winning more than 20 different awards including several Best Film and Best Director laurels. The film is represented by Gravitas Ventures domestically and Lotus Entertainment internationally. Wingman, Inc., a film which he wrote starring Kristopher Turner, Erin Cahill, and Reid Ewing, was released by Lion’s Gate in 2015.

The talented cinematographer on The Price for Silence is Mike Hechanova and the music was created by Paul Carbonara, former guitarist for the band Blondie.

The Price of Silence took home the Award of Excellence at the Accolade Global Film competition, with actors Emrhys Cooper, Kristin Carey and Lynn Mancinelli all taking home awards. At the Latitude Film Awards, the film swept the board for directing, acting and winning the gold award for the film.