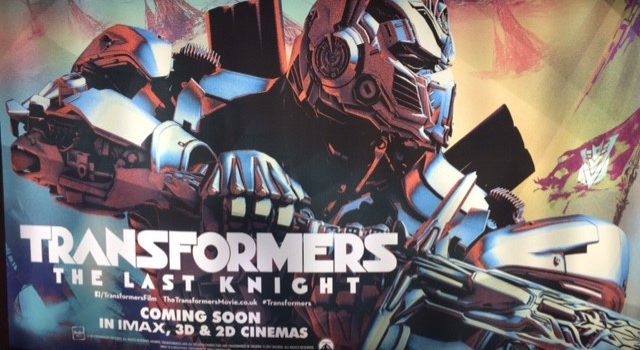 This evening Filmoria attended a very special Transformers event at the Cineworld IMAX in Leicester Square to preview some exclusive footage from Michael Bay’s...

This evening Filmoria attended a very special Transformers event at the Cineworld IMAX in Leicester Square to preview some exclusive footage from Michael Bay’s upcoming blockbuster, Transformers: The Last Knight.

With the footage opening with Bay in his editing suite, the first piece of video came by way of a featurette focusing on the fact that the film was shot entirely in IMAX, with this being the only movie this year to be shot in pure 3D, something that Michael Bay believes is a necessity and one that ensures that the full IMAX experience is felt.

And it’s hard not to be impressed by the grandeur of this ever-growing franchise, with The Last Knight once again presenting a truly fantastic visual spectacle. It was clear from the first scene from the movie – following a bunch of kids trawling through a ravaged football stadium and the surrounding streets seeking remaining robot parts – that the fifth instalment is a gorgeous presentation. Met by one of the key stars this time around in Izabella (Isabela Moner), the kids come across new Autobots Sqweeks and Canopy, with both looking every bit as detailed and fascinating as we would come to expect from this spanning series. Tracked by security bots that look reminiscent of the Robocop world the inevitable chaos would ensue before Mark Wahlberg’s Cade Yeager would make a heroic entrance. The sequence set the scene of a world devoid of Autobots and the notion of humans versus robots to no end.

Then it was on to Cade’s base of operations, with new character Desi (Jerrod Carmichael) providing the comedic presence left by the departed T.J. Miller from the film’s predecessor and an eventual government tracking leading to drones and a great chase scene within a tower.

Then came the introduction of possible film MVP (Bumblebee aside), Cogman. Very much a straight-talking and ruthless smaller Autobot, Cogman’s animation looks detailed to the nines and his mannerisms bring him a real character that will undoubtedly resonate with fans. His presence leads to the mission for Cade and co, with Anthony Hopkins and Laura Haddock entering the fray and uncovering a whole mythology surrounding the Transformers that spans back to the days of King Arthur.

As one would expect, the familiar tropes of Bay’s series are ever present in the clips we witnessed. There is plentiful opportunity for destruction and pyrotechnics, as much as there is room for some pretty laughable dialogue and profanities thrown in at intervals. Thankfully little product placement was present but in fairness a little under 30 minutes of the movie was unveiled so there’s ample opportunity for that to crop up!

Surprisingly though – especially given the messy nature of Age of Extinction – The Last Knight genuinely feels like it could be somewhat of a riot. It has all the ingredients to deliver in the action set piece stakes and Wahlberg has the knack to carry a film such as this with relative ease.

Of course, there will be fans and those who will bypass this like the plague, but for us, upon watching a bulk of footage it does pose an intriguing prospect for Bay’s final Transformers outing (allegedly).

Transformers: The Last Knight is out in UK cinemas on 23rd June.