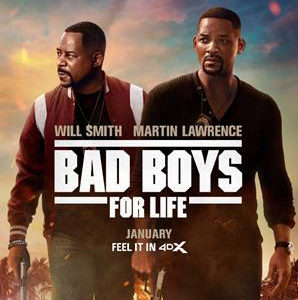 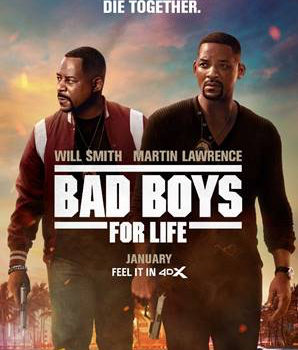 Turn up the heat when Bad Boys For Life explodes onto 4DX and ScreenX at Cineworld cinemas Cinemagoers will feel every punch, kick and shot... 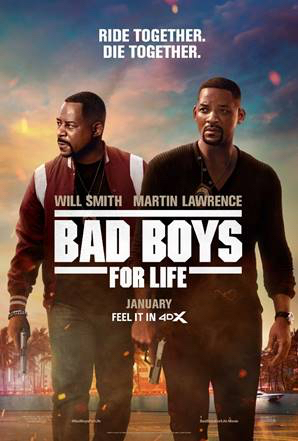 Cinemagoers will feel every punch, kick and shot as Will Smith and Martin Lawrence join forces one last time for Bad Boys For Life, the action-packed blockbuster which is released in 4DX and ScreenX on 17th January, exclusively at Cineworld.

Audiences will ride along with Detectives Mike Lowrey (Smith) and Marcus Burnett (Lawrence) in the third and biggest instalment of the franchise yet. 17 years after their last case together, The Bad Boys must confront new issues head on, as they join the newly created elite team AMMO of the Miami police department to take down the ruthless Armando Armas, the vicious leader of a Miami drug cartel.

With an array of incredible action sequences, 4DX and ScreenX offers the best setting for cinemagoers to get all the thrills of this exciting movie spectacle. The motion chair technology available in 4DX auditoriums will allow every twist, turn and crash of the film’s car chases to be felt as if you’re along for the ride yourself, with the thud of the gun shots making a serious impact. With ScreenX the world’s first multi-projection cinema technology allows the action to expand past the centre screen onto the side walls of the auditorium. This will be included in many of the film’s most gripping action scenes, including chases, shoot-outs and fist fights.

Bad Boys For Life marks the first ScreenX release of 2020 following a stellar year, in which it set new box office records in UK. Total box office record for ScreenX increased 212% compared to 2018 in UK, driven by Hollywood films such as Spider-Man: Far From Home, Shazam! and Captain Marvel.

Bad Boys For Life is in UK and Ireland cinemas from 17th January 2020.

Cineworld aims to be the best place to watch a movie, offering an unparalleled cinema experience in the UK & Ireland, with 102 cinemas and over 1,050 screens. Cineworld Group was founded in 1995 and is currently the second largest cinema chain in the world following the acquisition of US cinema group Regal Entertainment Group in February 2018. In 2014, the Cineworld Group combined with Cinema City International (CCI) and appointed CCI Founder and CEO Mooky Greidinger, as CEO of the Cineworld Group. In August 2016 Cineworld acquired 5 Empire Cinemas, including the iconic Empire Theatre in Leicester Square. This was followed by the acquisition of Empire Newcastle in 2017. Cineworld currently has 24 IMAX® auditoriums, and 15 Superscreens nationwide, as well as a special VIP experience currently available at 5 of their cinemas. Cineworld are the only operators in the UK to offer ScreenX – a 270-degree format that projects onto the front and side walls of the theatre across 16 auditoriums and 4DX – the immersive multi-sensory cinema experience, with 29 auditoriums across the UK and Ireland, including Cineworld Leicester Square.

CJ 4DPLEX is a leading, next-generation cinema technology company, headquartered in Seoul with international offices in Los Angeles and Beijing. The company has created innovative film technologies for theaters worldwide that include ‘4DX’, ‘ScreenX’ and ‘4DX Screen’ for consumers to experience films in ways that were never before possible.

4DX provides moviegoers with an advanced, multi-sensory experience, allowing the audience to connect with movies through motion, vibration, water, wind, snow, lightning, scents, and other special effects that enhance the visuals on-screen. Each 4DX auditorium incorporates motion-based seating synchronized with more than 20 different effects and optimized by a team of skilled editors, maximizing the feeling of immersion within the movie, beyond the limits of audio and video. More than 690 Hollywood and local titles have been screened in 4DX. To date, more than 80,000 4DX seats operate in 731 auditoriums, spanning 65 countries.

ScreenX is the world’s first multi-projection theater technology used within a theatre setting, marking it as the most visually advanced theater experience of CJ 4DPLEX. ScreenX allows moviegoers to go beyond the frame of the movie screen by utilizing a proprietary system that expands images of feature films and pre-show advertising to the left and right walls of the theatre, creating a surrounding, panoramic, 270-degree viewing experience. To date, ScreenX has been installed in 305 screens around the world in 32 countries.