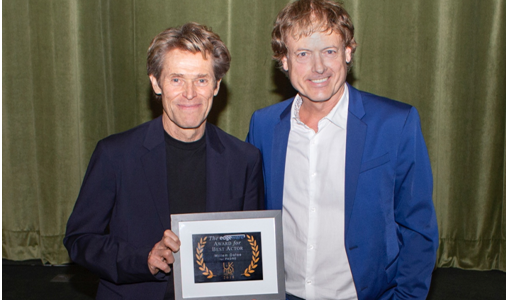 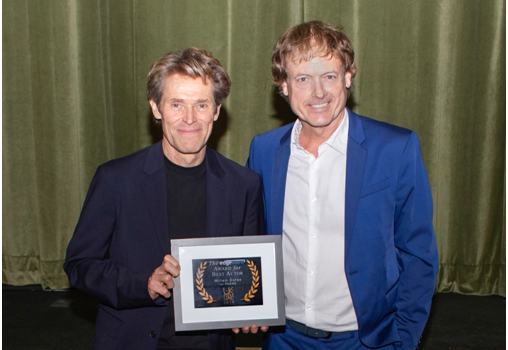 UKFF Director Murray Woodfield presenting the award to Willem Dafoe at the HBF Screening at the Regent Street Cinema Willem Dafoe has won the... 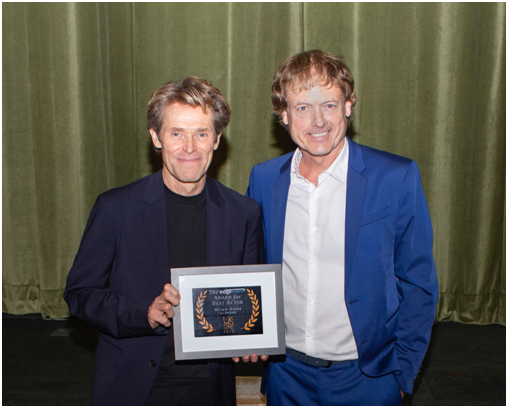 Willem Dafoe has won the Edgeware Award for Best Actor at this year’s UK Film Festival. The announcement was made at the awards ceremony on Saturday 24 November at the Soho Hotel. The award was presented as an outstanding achievement award, and for Willem Dafoe’s performance in Giada Colegrande’s PADRE which was shown on Saturday night as part of the Festival. The film also featured the universally acclaimed performance artist Marina Abramovic.

Other winners announced on Saturday night were INTERCOURSE by Jonathan Etzler which clinched the Edgeware Grand Prix, the largest cash prize for a short film in the UK. The Edgeware Award for Best British Short Film went to MOTHERING by Lucy Bridger, and UNO by Javier Marco won the Edgeware Jury Prize. The Best Feature Award went to THE LITTLE COMRADE by Estonian director Moonika Siimets, and THE WAIT by German director Karin Becker won Best Feature Documentary.

Anna Smith – film critic, broadcaster and President of the UK Critics’ Circle. She is a regular critic for Time Out, Metro, The Guardian and Sight & Sound. Anna also appears on BBC and Sky TV – if you stay up to watch the Oscars on TV, you will have seen her commentating from Sky Cinema’s sofa.

Richard Brandon – the Chief Marketing Officer at Edgeware and an expert in TV Technologies with 30 years in the industry. A huge enthusiast of storytelling, Richard has spoken at forums such as NAB, IBC and the European Parliament.