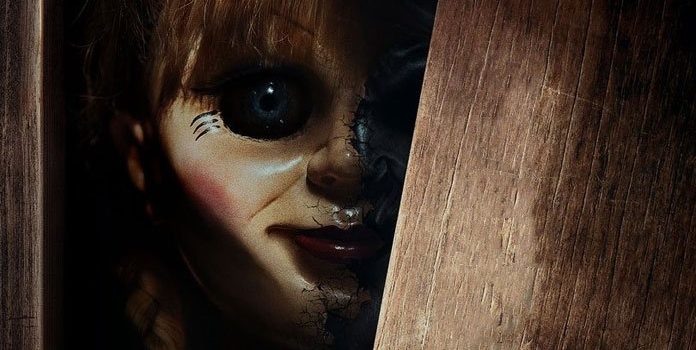 The possessed doll Annabelle, known from The Conjuring universe, arrived in London today, accompanied by actress Emilia Sofia Varslauskaite, 12.  The creepy pair were...

The possessed doll Annabelle, known from The Conjuring universe, arrived in London today, accompanied by actress Emilia Sofia Varslauskaite, 12.  The creepy pair were seen travelling towards Stratford, where they are to star in a terrifying new Annabelle Creation horror experience.

Warner Bros Pictures and New Line Cinema invite you to brave the ultimate scare challenge of babysitting Annabelle, the demonic doll from James Wan’s The Conjuring universe, later this month.

The immersive horror experience, conjured up by some of the creative team behind David Copperfield and featuring actual props from the hotly anticipated new film Annabelle: Creation, opening in cinemas across the U.K. on 11th August, will combine magic effects, directional sound and immersive theatre to give visitors the fright of their lives. It has been brought to life in close consultation with the filmmakers, including director David F. Sandberg.

Taking place in a creepy, purpose-built Victorian mansion on the site of the Town Hall in Stratford, Annabelle’s House promises to give guests the most nail-biting twenty minutes of their lives using fright techniques prepared especially for this challenge.

Participants will initially be asked to babysit a seemingly innocent eleven-year-old girl whilst exploring the set, which is filled with genuine props from Annabelle: Creation. But it won’t be long before the long-dormant demon inside the Annabelle doll, an unholy force intent on stealing human souls, comes to life and possesses the entire house. Additional frights are being kept under wraps for this unrivalled scare experience.

Annabelle’s House will open its doors to the public in East London for a limited time from 27th July following journalist and celebrity previews. It marks the release of Annabelle: Creation, a new chapter in the Conjuring universe, which lands at UK screens on 11th August.

Thrill seekers can now apply for tickets at https://www.warnerbros.co.uk/whats-hot/articles/2017/july/annabelle-creation-immersive-horror-competition  or visit www.facebook.com/annabellefilmuk
The experience lasts 20 minutes and is very much not for the faint of heart.