The Best Occult Retro Movies Ever

When you’re a kid, you usually find occult movies terrifying. But as you get older, you gradually get to understand their dark humour. Whatever...

When you’re a kid, you usually find occult movies terrifying. But as you get older, you gradually get to understand their dark humour. Whatever you get out of them, this genre is unique, fascinating and, for some of us, great fun.

They’re enjoyable in the same way you might enjoy having a psychic reading or visiting a haunted house, doing ghost walks – or attending a clairvoyant séance etc. Whether or not you believe it – it’s fascinating to dip a toe in the water anyway.

So in the “spirit”, we might say, of doing just that with movies – you have to watch the 1968 movie “Witchfinder General” if you haven’t seen it. This is possibly the greatest of all occult movies, starring the king of occult films himself, the late great Vincent Price. Based on a Ronald Bassett novel and shot on a low budget, the film tells the story of a witch-hunter Mathew Hopkins (played by Price) during the English Civil War. Hopkins and his sadistic assistant John Stearne (played by Robert Russell) visit villages in East Anglia where they torture confessions out of witches. It’s darkly chilling, brutal stuff, played by the wonderfully slightly camp Price – and unmissable for anyone interested in the occult film genre.

The same can be said of Roman Polanski’s movie from the same year, “Rosemary’s Baby”. In short, Rosemary, played by Mia Farrow in her most famous role, becomes impregnated with Satan’s own child. If this doesn’t scare you witless – nothing will.

Well actually, “The Wicker Man” might. This 1973 horror starring that other king of the genre, Christopher Lee, is often thought to be the greatest British horror film ever. It tells the tale of a police officer who visits a Scottish Island whilst investigating the disappearance of a young girl. On the island, the policeman discovers that the locals have abandoned Christianity and embraced paganism. It transpires that the Police Sergeant himself is an intended sacrifice to the gods. The villagers‘ leader, Lord Summerisle, played by Lee, then forces the policeman into a giant wicker man and sets it alight as the villagers chillingly sing the folk song “Sumer Is Icumen In”. This is guaranteed to make the hairs on the back of your next stand up.

The 1973 movie The Exorcist is also a must-see for occult devotees. It tells the story of a single Mum and her 12-year-old daughter, Regan, who becomes possessed with evil spirits after playing on an Ouija board. As the title suggests, her Mum decides it’s time to involve an expert priest to perform an exorcism.

In the film, it’s the use of the Ouija board that allows the spirits into the world, as the Ouija board acts as a portal between our world and the spiritual world. Had she taken part in tarot readings, there would be no basis for a scary movie. That’s because tarot cards allow you to explore life’s meanings through interpreting the images on the cards, rather than making contact with spirits, which can be both good or bad. But then, of course, the Exorcist film without the horror wouldn’t have been half the blockbuster success it turned out to be! 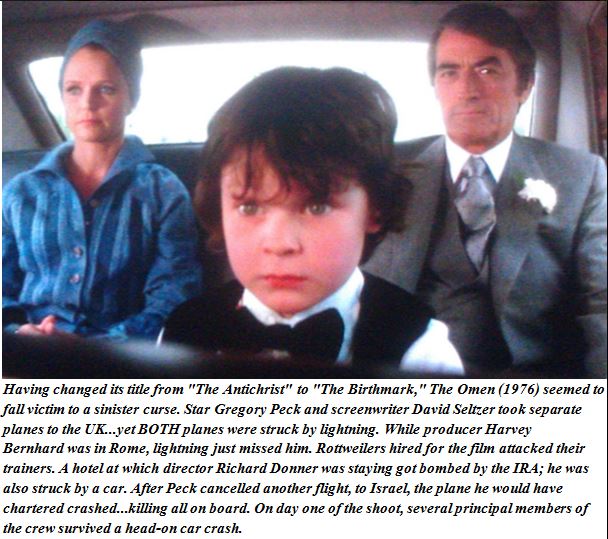 And if there’s one more you have to have on a shortlist, then it’s surely the 1976 film, “The Omen”. The film tells the story of an American diplomat and his family who move to the UK after the death of their new-born son in Rome. But the father (played memorably by Gregory Peck) agrees to conceal the death of the baby and to adopt, there and then, another child without telling his wife.

As this boy Damien grows, strange things begin to happen and we gradually learn the unthinkable truth about him.

These five occult movies will get you off to a great start if you’re new to the genre. Just make sure you watch them with friends – and with the lights on!