Budding builders and TRON fans now have the chance to build their very own TRON Light Cycles for Sam Flynn and Rinzler– with this...

Budding builders and TRON fans now have the chance to build their very own TRON Light Cycles for Sam Flynn and Rinzler– with this brand-new LEGO Ideas set, straight out of another dimension!

LEGO Ideas | Disney TRON: Legacy is perfect for recreating the iconic chase scene from Disney’s TRON: Legacy as well as other scenes from the film. The grid base also allows you to proudly display your Light Cycles making this the perfect model for both play and showcasing your building skills.

The latest addition to the LEGO Ideas range was designed by Drew and Tom, from YouTube Channel, BrickBros UK. Both Drew and Tom have been inspired by LEGO bricks since their childhood and wanted to make sure that they captured both the scale and the colours of the Light Cycles in their model.

The impressive models feature translucent blue and orange bricks replicating the futuristic lights on the TRON Light Cycles, with power stream effects. Amongst a host of other authentic features including Identity Discs, the grid featuring attachment points for the two Light Cycles and translucent blue elements, as well as the ability to split into two separate grids.

The set contains 230 pieces including three LEGO Minifigures – Rinzler, Quorra and Sam Flynn, complete with Identity Discs to stage your own disc battle. 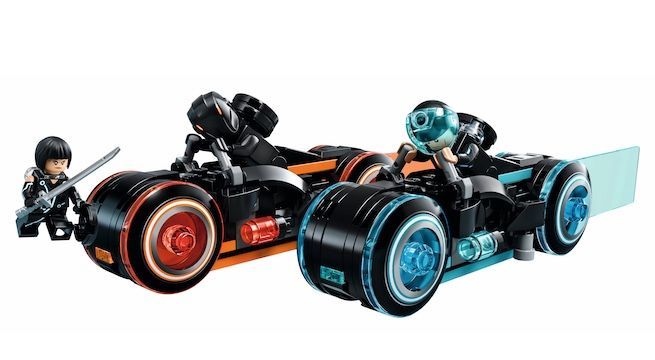 LEGO Ideas offers fans the opportunity to put forward their LEGO creation ideas to be in with the chance to have their concept brought to life with the help of LEGO master designers and a share of the profits.

Fans can submit their ideas at ideas.LEGO.com.