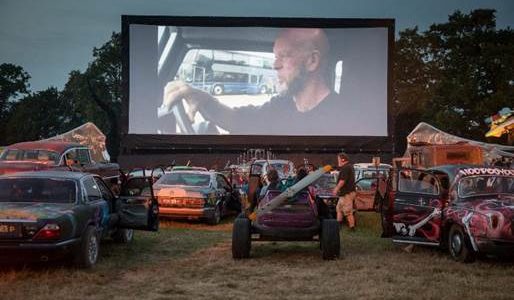 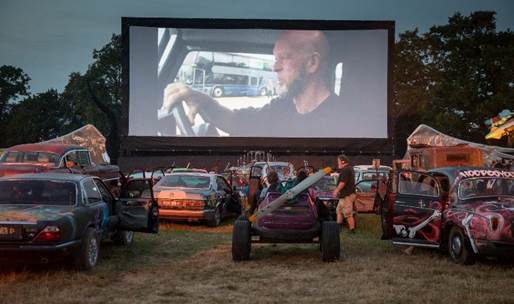 The unique five-day film festival within Glastonbury Festival is back for its second edition with world premieres, pre-release screenings and star-filled introductions. Curator Julien...

The unique five-day film festival within Glastonbury Festival is back for its second edition with world premieres, pre-release screenings and star-filled introductions.

“Welcome to Cineramageddon V2 with a rock n’ roll edge to the film programme.  With 70 mutated cars, and up to 5,000 headphones there’s more apocalyptic hospitality and cuddle space than ever before. It could only happen at Glastonbury where people prove each year that they can handle any kind of weather and there’s nowhere better to watch a movie, outside and under the stars”- Julien Temple

THE NIGHT OF THE HUNTER – THURSDAY 9.45PM

CINERAMAGEDDON is a five day film festival within the festival, curated by director Julien Temple, a new kind of rock ‘n’ roll cinema attitude, outside and under the stars.

Rising out of the Arthurian mists of Avalon and the world famous Glastonbury mud, CINERAMAGEDDON is a unique post-apocalyptic and nocturnal ambience in which to watch an unforgettable program of films in ways never seen or dreamt of before.

Presented by event and film producer Stephen Malit, the 2000 capacity CINERAMAGEDDON will run from Wednesday night through to dawn on Monday – a midsummer movie explosion that will take the audience on a thrilling cinematic journey through the Glastonbury night and out the other side.

Alongside the nocturnal Cineramageddon arena, the Black Lamp Hub – a social space for filmmakers & fans – will present film screenings, workshops by The Engine Room and a new bar area.

Kicking off daily with our leisurely ‘Breakfast with Bertolucci’ film at noon, the music afternoon documentary slot will screen BROS: AFTER THE SCREAMING STOPSfollowed by a Q&A Matt Goss & Luke Goss from Bros, TALES FROM TIN PAN ALLEY and RUDEBOY – THE HISTORY OF TROJAN RECORDS with directors of both films in attendance for Q&A’s.