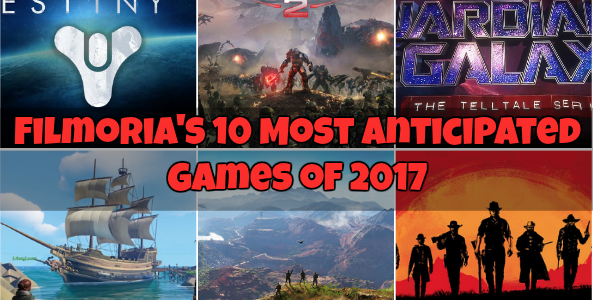 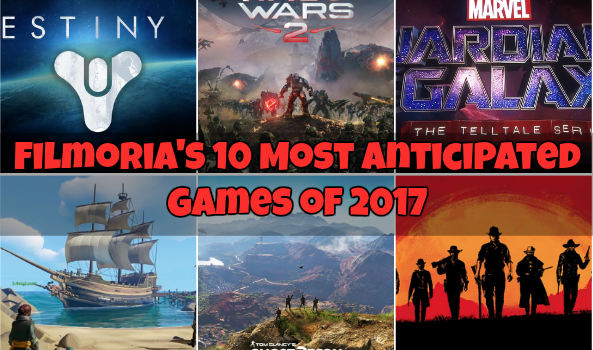 Filmoria’s 10 Most Anticipated Games Of 2017

2016 was an absolutely fantastic year for gaming.  We saw the likes of Doom, Battlefront, Battlefield, Final Fantasy and Overwatch hit the shelves, boasting...

2016 was an absolutely fantastic year for gaming.  We saw the likes of Doom, Battlefront, Battlefield, Final Fantasy and Overwatch hit the shelves, boasting one of the best game lineups of recent years.  This year, we want to see game developers take their titles to the next level.  So let’s take a look at some of the most anticipated games of 2017, in no particular order:

Following on from the Mass Effect epic series, a new story is to be told and we can expect great things.  The highly anticipated sequel to the critically acclaimed trilogy takes place 2.5 million light years away from earth, and with distance comes mystery.  Explore, conquer and enquire through this new galaxy and it’s inhabitants – and make your own unique decisions every step of the way with new characters (goodbye Commander Shepard!).  We’re really excited about this new instalment of the Mass Effect franchise, and we’re sure most will be.

Mass Effect: Andromeda will be available for Xbox, PS4 and PC and is set for release in the first half of 2017

Rare studios is back and in full operation!  From the developer that brought us the classics Goldeneye, Conkers bad fur day and Banjo-Kazooie, comes a new pirate themed open world game.  Not much is known about the specifics of the game, but the theme of the game is what makes this list.  Hop online with your friends to roam the open seas, drink grog and pillage?  Yes please.  Since Assassins Creed: Black Flag, we have been in dire need of a good pirate game – and we think this one will hit the spot.

Sea of Thieves will be released on PC and Xbox One, and is set for a 2017 release date

Who doesn’t love a tactical stealth game?  The hugely successful Sniper Elite series returns with the fourth instalment of the franchise, this time set in Italy.  It boasts an impressive kill cam system (reminiscent of the Mortal Kombat X-Ray damage camera), and improved AI in game.  If you enjoyed Tom Clancy’s Splinter Cell or the Hitman Series, you’ll be sure to love this game.

Halo Wars comes back for a second instalment – almost 8 years after the original was released!  This is a title long awaited by Halo fans, after the long-time first-person shooter franchise decided to change up the style for this title series to an RTS style (Real Time Strategy) 8 years ago.  Featuring new alien factions and old human crews, this new instalment looks like it’ll be a great follow-on for the original Halo Wars.

Halo Wars 2 will be released in February 2017, and will be available on Xbox One and PC.

It looks like Ubisoft have made the move from boxed in levels which the game has previously thrived on, into a full on open world scenario.  For game enthusiasts, this is a great addition to the triple-A series, mixing a great team based strategy shooter with a survival open world location.  We think this is a great direction for Ghost Recon, let’s hope it lives up to the hype!

Tom Clancy’s Ghost Recon: Wildlands will release on March 7th 2017 and will be available for Xbox One, PS4 and PC.

How many of us faced the terror of the fantastically horrifying first Outlast game?  Well, it’s back and all sources point to it being far more terrifying than the first game.  The demo for the game released last year and received great praise, giving the thrill seeking audience something to really look forward to.  Although this game has been pushed back a few times, in this day and age in the games industry, that’s a good thing, meaning it’s not being rushed.  Based around a doomsday cult and a married couple getting lost, this second instalment looks promising!

Tekken is back – and with a brand spanking new engine!  It’s the first game in the series to use the Unreal engine and by the looks of it, the graphics are top notch.  The 9th game in the series, Tekken 7 was available as a limited arcade game in Japan in 2015, and received an update in 2016.

With new mechanics, characters and items, Bandai Namco seem to have put some work into this game.  Details on the final release date are to be announced later this week, so stay tuned!

Tekken is to release early 2017, and is available for Xbox One, PS4 and PC.

Ah yes.  Destiny.  If you bought into this seemingly amazing game 2 years ago, you’ll know the disappointment many of us faced.  No storyline, no matchmaking in raids (for a multiplayer game), rumours of Bungie starting practically from scratch a year before release and lots of social media hiccups.

They promised us that Destiny 2 would be better – it would be more and it would be all we would ever want.  From the way Bungie handled promises in Destiny, it’s reasonable that many people tread cautiously towards this upcoming game.  We hope they stay true to their promise and deliver the near perfect game.  Who knows?

It’s here!! Red Dead Redemption captured many a gamers’ heart with it’s fantastic story, intuitive shooting mechanics and generally brilliant graphics.  Without spoiling the ending to the first game, the direction this game takes will be a very interesting tale.  Where, who, when?  We’re not quite sure.  What we are sure of, however, is this game is looking to be one of the most anticipated of the year and it has big boots to fill.

If you’ve ever played any other TellTale game, you’ll know that story is king.  The emotions the young cause you to feel, the alignment with characters and the conversation with friends over what is usually a fantastic story.

TellTale keep things gritty and true-to-life.  Their stories depend on it and they don’t hold back on much.  Take their hit Walking Dead series, The Wolf Among Us and their Game of Thrones stories – all brilliantly portrayed and we think with the popularity of Guardians of the Galaxy, it will be one to look out for.

Guardians of the Galaxy: TellTale is to release in 2017, and is available for Xbox One, PC and PS4.

What games are you looking forward to?  Think we missed any amazing ones off the list?  Comment below!