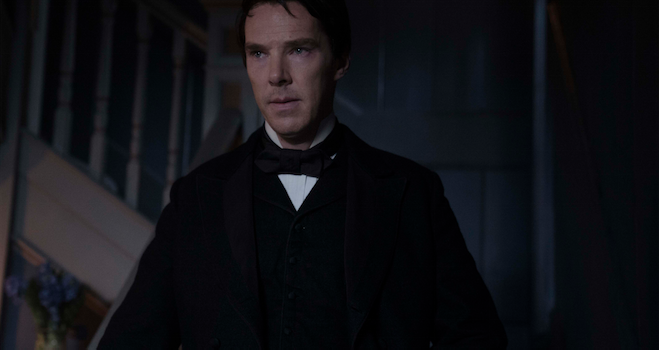 Sherlock star Benedict Cumberbatch is Thomas Edison in the first image from The Current War!

As filming for Alfosno Gomez-Rejon’s (Me and Earl and the Dying Girl) forthcoming drama The Current War gets underway in London, The Weinstein Company have unveiled the first official image from the film, which showcases Benedict Cumberbatch as the legendary American inventor Thomas Edison.

Featuring a stellar supporting cast including Michael Shannon, Katherine Waterston, Tom Holland, Nicholas Hoult, and Tuppence Middleton, The Current War is set to depict the creative battle between Edison and George Westinghouse (Shannon) as they race to create a marketable and sustainable electrical system.

“Edison and Westinghouse’s rivalry is the ultimate tale of competition driving ingenuity,” said Harvey Weinstein. “Theirs was a battle of intellect, a race of creativity and technological innovation that we see echoed in the self made inventors dominating spaces like Silicon Valley. We’re thrilled to start filming and to share this historical rivalry with audiences everywhere.”

The film is yet to secure a theatrical release date in the UK and US, but with principal photography in progress right now, we wouldn’t be surprised if the film appears late in the festival season at the likes of TIFF (Toronto International Film Festival).