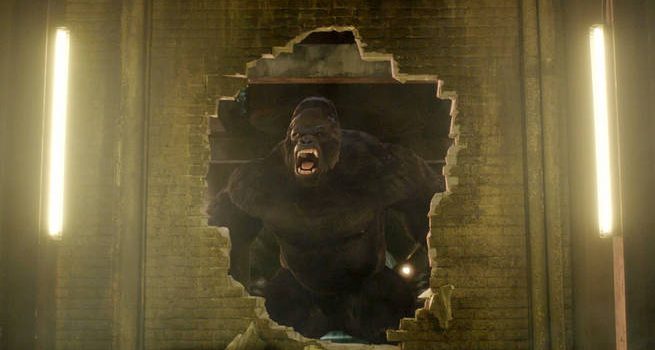 Grodd Returns In The Flash Promo For Attack On Gorilla City!

Following this week’s episode of The Flash – for which you can read our review here – we were teased the re-emergence of the villainous...

Following this week’s episode of The Flash – for which you can read our review here – we were teased the re-emergence of the villainous Grodd, with Jesse Quick returning via one of those handy portals to warn Wally that her father Harrison Wells had been kidnapped. While it wasn’t mentioned who exactly had kidnapped him, the very words ‘Gorilla City’ answered that very question and laid the path to the two-part episode coming on 21st February to The CW.

Grodd was certainly one of the best villains to have come to the show since it was introduced and the chance for us viewers to see Team Flash visit Gorilla City and look to save Harrison Wells serves as a scintillating proposition. Within the trailer it’s great to see the show is cheekily referencing Tom Felton’s appearance in The Planet of the Apes movie and the presentation of the city itself looks absolutely stunning, as well as the visual appearance of Grodd himself.

Check out the extended trailer below along with the two-episode synopsis.

BARRY AND TEAM TRAVEL TO GORILLA CITY AND FACE GRODD – When Jesse Quick (guest star Violett Beane) informs the team that her father (Tom Cavanagh) has been abducted, Barry (Grant Gustin), Caitlin (Danielle Panabaker), Cisco (Carlos Valdes) and Julian (Tom Felton) voyage to Earth-2 on a rescue mission to save Harry from Gorilla City. As they trek through the forest, Barry and the team are immediately captured and brought to Grodd (voiced by David Sobolov). Grodd tells them he needs their help to stop Solovar (voiced by Keith David), the leader of Gorilla City, as Solovar wants to invade Earth-1. Meanwhile, back on Earth-1, Jesse and Kid Flash (Keiynan Lonsdale) hit the streets to stop a metahuman that can control gravity, with H.R. and Joe (Jesse L. Martin) guiding them from S.T.A.R. Labs.